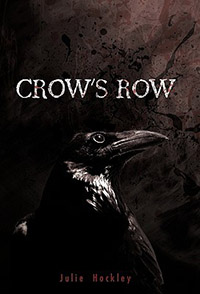 Crow’s Row is an enigma for me – it grabbed me right away – and that’s good because I’ve decided that I’m no longer interested in sticking it out trying to read a book that’s not captured my interest just for the sake of reviewing it on my blog.  I’m busy – super freaking busy, so why spend time reading stuff I’m not really interested in just to say I read it.  But, at times I was frustrated about the slow initial pace and once again, the “V” word.  Can we get over the whole virgin thing?  This is new adult, right?  Spice it up for F’s sake.
OK, anyway.  This book has a lot going for it and so I’ll start there:
Very original idea with the illegal drug industry.  I’ve not read about this one before so it’s a nice change from the paranormal stuff I’ve been reading.
Likable characters.  Not great characters, but good enough.
Cool setting.  I dug the drug lord’s hangout!
Twisty plot – I actually did not understand what was going on until it was reveals about who Cameron was – that’s a good thing!  It kept me guessing and I like that, it implies the author had a plan and executed it well.  As far as the end, I suspected that and it felt right.  So, I have no complaints about the ending and it was NOT a cliffhanger.
Where this author could focus on improving:
Dialog.  Definitely not the best dialog I’ve read.  I think dialog is crucial for exceptional character development and that’s why Emmy wasn’t a great character, only a good one.  Ditto for Cameron and the rest.
Fewer descriptions.  If you’re gonna write a story that’s twisty and thrilling, less is more when it comes to descriptions.  There was way too much at times and I found myself skimming.
But all in all, this book was a solid four and a half stars.  I read it in two days, less really – I was literally up all night reading and I will definitely pick up the second when it comes out.