I’m obsessed with understanding why I like a character. Why I like a story as well, but mostly what makes me drawn to one character over another. I think about this a lot when I’m reading, partly because I’m a writer and partly because it will help me find more books that I enjoy. 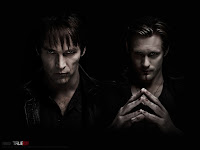 Knowing why readers connect to, say, Eric Northman in the Sookie Stackhouse novels, is important. Why Eric? I love Eric, far more than I ever loved Bill. Bill is just…not Eric. And apparently Sookie agreed.
Bill is good-looking, he’s a vampire, he’s sorta old, which makes him powerful. He’s rich, he’s compassionate, and he gave Sookie his blood (creating the blood bond) just like Eric did.
So, ya know. You’d think Eric and Bill would be on fairly even ground.
But it’s never been that way, for me at least. Eric Northman stands out as a character. He’s a tall, blond, Viking for Pete’s sake – need I say more? (Well, yes actually – lots of Vikings might come off as repulsive with all that love of plundering. Plus, the long beard really never worked for me.) 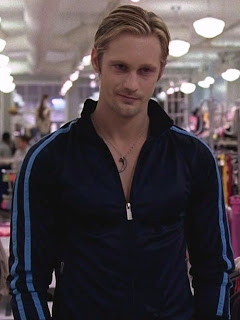 At one thousand years old, Eric is powerful, he’s good-looking, and he’s even quaint in some ways. Remember that track suit he wore to the mall in True Blood Season 2. Track suit? On a Viking? Yet he didn’t seem embarrassed at all – in fact he ROCKED that tracksuit like a freaking rock star! That makes him cute!
But beyond those things Eric Northman is a very dangerous man known for doing very dangerous things. And what sets him off his game? One little waitress. Of course, Sookie is a fabulous character in her own right and that’s why he’s drawn to her. But it’s his reaction to her that makes him desirable.
I like Eric Northman because he’s forced to reconsider long-held beliefs for a woman. Plus, he’s hot, right?
Characters are memorable when they do the opposite of what you might expect. Not the same old thing. Bill, he’s just another vampire. He behaves like just another vampire. He is, in my opinion, rather boring compared to Eric. He tried to rock the tracksuit and lost. Came in last, in fact. His tracksuit was sweaty, not hot.
Eric is unpredictable in many ways, but he’s predictable in all the ways that count. He likes Sookie and he wants her to know it. Not only that, he goes out of his way to let her know it. Remember the new gravel for the driveway? Maybe not the most romantic gift, but she didn’t have to ask him for it – he understood her rant/breakdown, stepped in, and took over.
I have an Eric character in my I Am Just Junco series only his name is Lucan. Lucan enters the story in Fledge (book two). He’s old, thousands of years old. He’s not a vampire, he’s…well I can’t tell you that! It would spoil everything! He’s very powerful, and he’s good looking.

But Lucan’s popularity as a character comes from how he reacts to Junco. One of the first things we learn about him is that he’s afraid of her. Something about her has set him off his game. But beyond that, he’s fascinated by her as well. And she’s not even in the mood to deal with his crap, she blows him off completely. If he wants to be part of her world he must earn her friendship first.
It’s the little things he does to earn her respect that make him memorable. He pays attention to her, he is careful with her, and even though he has powers beyond Junco’s understanding, he steps aside and lets her chart her own course. He wants Junco to know that she should respect him because he respects her.
This is what makes me love a character and when I set out to write my books, I took this all into consideration. I hope you’ll check out my first book – Clutch (Book One of the I Am Just Junco series) – at Amazon right now for only 99 cents. The leading man in that book is named Tier and he captures Junco in more ways than one. 😉
I’d love to hear your thoughts on Tier and how he compares to the Eric Northman types as a character so please leave me a review on Amazon when you finish the book and let me know.
And don’t forget to enter the giveaway contest – each autographed copy of Clutch will come with some cool swag, too! 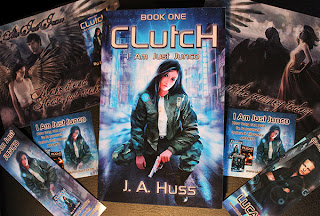 One Response to “Why We Love Fictional Characters”