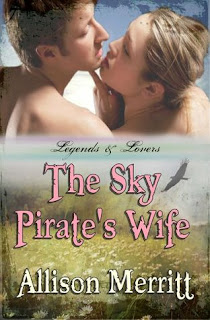 I have Allison Merritt with me today at New Adult Addiction and she’s agreed to answer my blathering questions!  Her new book, The Sky Pirate’s Wife, is the first part of the Legends and Lovers series.  Thank you so much for being here, Allison.

I started getting really interested in myths and legends when I was in college. When I started writing the Legends and Lovers series I wasn’t thinking about American myths, because my characters leaned toward British heritages with the exception of a couple of the heroes. The first book was set in Australia, but because agents kept freaking out about the setting, saying they couldn’t sell that in America, I started doing research for Native American lore. It worked out really well because there are some great stories out there. And the funny thing about it is that a lot of cultures share similar myths and legends.

I’m definitely a seat of the pants type. I’ve tried outlines, but I deviate wildly. I accept the fact that my type B personality killed my type A personality ages ago.

The characters at least give me the courtesy of telling me about themselves. They appear mostly fully rounded out, although they do throw secrets out there sometimes. My books tend to be character driven, so what’s going on in the plot is more or less decided by the characters.

There’s a scene toward the end of The Sky Pirate’s Wife where the hero and heroine are about to part ways because he’s trying to send her to safety. It broke my heart to write this scene in her POV. Her husband gives her a special piece of jewelry he had made. In that moment when he’s about to leave, she realizes that they’ve both changed. He’s learned to love a person instead of his company and she’s learned that he sees her as a woman, not just an heiress to be used for her dowry. But it does a better job of explaining itself:

Van Buren looked down at her, brushing his knuckles along her cheekbone. She ducked her head, unwilling to let him see her tears.

“Fenton will be here in a few minutes. I trust the two of you will keep each other out of trouble.” His attempt at humor failed. “I love you so much, Sophie. This will be over soon and I’ll take you someplace exotic to celebrate our marriage properly. Would you enjoy that?”

He sounded so gentle, like he was trying hard to please her. The man in front of her was vastly different from the one who’d tried to seduce her in Sacramento. Her heart broke as she met his eyes.

“I’ll be happy wherever you are.”

“We will be together soon.” He bent over and pressed a kiss against her forehead. “I want you to wear this.” He took a small, thin box from his jacket pocket and held it out. “I had it made shortly after we arrived. It’s a miracle it survived the attacks.”

Van Buren took her hand and settled the box on her palm.

She lifted the lid and looked down at the perfect replica of the phoenix pin he wore. The metal glittered in the light. Her breath caught in her throat. With shaking fingers she picked it up, letting the cool metal warm against her skin. “It’s beautiful. I’ll never take it off.”

When she placed it in his hand, the diamond in her ring flashed. Was it only days ago that he’d purchased it for her? Somehow it didn’t seem as special as the pin he’d presented her with. She watched his face as he removed the back from the pin, slipped the post through the material of her lapel and reached behind it to put the back on again. The dark gray of his irises were tainted with sorrow and smoky with fear.

He leaned back to admire his work. “It’s very fetching. Everyone will know you’re Mrs. van Buren immediately when they see it.”

Sophie rose, slipping her arms around his neck. Their lips met with enough force to bruise her mouth. Tears escaped her eyelids, hot against her cheeks. Even in her turmoil, she wanted him, yearned to return to the ship and share one more intimate moment with him. A sob burst from her when she let go of him. Her hat was crooked, pulling a few strands of hair tight against her scalp. With the back of her hand, she brushed the tears away.

One of the characters from the book that I’m releasing next spring. His name is Basil Tinwhistle and he’s an agent for a group that investigates and gathers information on supernatural phenomenon and entities. He has a very dry wit he uses to cover up his emotions.

It’s no secret. I’d be all over Thor from the Avengers if I could get my hands on him. Mmm, big muscles, sultry smile, and baby blues. Very nice.

Hands down in The Sky Pirate’s Wife, Alwin van Buren is my favorite. Maybe it has something to do with his demands for a book of his own, but he’s the right amount of manly-man and soft marshmallow hero. He was a great character to do dialogue for because he had good supporting characters who like to argue with him.

Sometimes it depends. In The Treasure Hunter’s Lady I was taken with the idea of writing a steampunk romance. I was doing research on convicts in Australia when I came up with the idea because I was reading about aboriginal myths. The plot unfolded from there and the characters materialized to fit and shape it more. With The Sky Pirate’s Wife, the hero is one of the minor characters from The Treasure Hunter’s Lady. He’s an airship captain and I knew his story would revolve around airships and a mythological creature that took to the skies.

The title came first. In The Treasure Hunter’s Lady the heroine refers to Van Buren as ‘sky pirate’ a few times, even though he’s a legitimate capatain who . . . might deal in a few shady practices now and then . . . but just to help a friend, you understand. I did, however, forget at one point that it was called The Sky Pirate’s Wife and I thought, what if they just didn’t get married? That would require a different title.

Sometimes it depends on the type of story I’m writing. For steampunk I like my characters to be a little more adventurous and willing to take risks. When I write historical romances, they’re a little more down to earth and have more common sense. I love the Old West, so when I was writing The Treasure Hunter’s Lady, I made the hero a devil-may-care cowboy. He worked out perfectly with my stubborn adventurer’s daughter heroine. For The Sky Pirate’s Wife, the headstrong unchallenged airship captain needed a heroine who had been walked on before, but was ready to take her place as a partner to soften him up.

One of my favorite websites is http://behindthename.com. You can find names from a lot of nationalities with a pronunciation guide and most of the time a history of when the name was used, when it was first recorded, and all kind of details.

More About the Book

After a tragic airship wreck, Captain Alwin van Buren makes a drastic decision to obtain a wealthy bride in order to save his flagging business. He meets his match in Sophie Barnes, heiress to an airship empire. After he seduces her and ensures their marriage—igniting a rivalry with her godfather—he learns the green-eyed beauty is as headstrong as he is.

Sophie knows Van Buren’s reputation based on a series of dime novels written about his adventures. Determined to be more than an end to a means, she despises him for luring her into marriage. In fiction, he’s a no-nonsense captain on the verge of piracy, but the flesh-and-blood man wins her heart by proving she’s worth more to him than her money.

Their love is threatened when Sophie learns Van Buren’s airship accident was a result of mythical creatures. Winged predators that appear to have a grudge against him, a fact he deliberately hid by accusing her godfather of sabotage. If she can forgive him for that, they still have to face the danger when they’re cornered and at the mercy of beasts and the evil that controls them.

Blog
A life-long love of reading turned Allison Merritt into an indie author who writes historical, paranormal and fantasy romances, often combining the sub-genres. She lives in a small town in the Ozark Mountains with her husband and dogs. When she’s not writing or reading, she hikes in national parks and conservation areas.

Allison graduated from College of the Ozarks in Point Lookout, Missouri with a B.A. in mass communications that’s gathering dust after it was determined that she’s better at writing fluff than hard news.

She serves as the webmistress and vice president during the 2011-2012 year for Ozarks Romance Authors in Springfield, Missouri and has been a member since 2009.