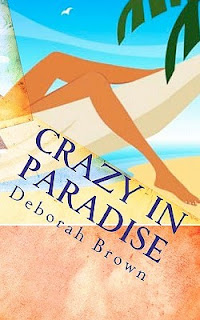 ME:  I’d like to extend a warm welcome to Deborah Brown, author of Crazy in Paradise.
DEBORAH: Thank you, Julie, for this wonderful opportunity to share with your readers.

I owned an apartment building for several years and the tenants that came and went have all in a small way become fodder for my books.  Like the main character, Madison Westin, I had a penchant for renting to an eclectic group of misfits.

Because I like to think of myself as an organized person, I gather together miscellaneous bits of paper, my tape recorder and notepads that I continuously scribble in and start my outline.  One liners about where the story is going.  It’s a bit like winding my way through a maze.  My next step is to write chapter synopses and the first draft is born.

For my main characters, Madison, Zach, Fab and a few others I wrote extensive character descriptions.  The secondary ones I have the fun of making up along the way.

The opening of my book ~ “There should be law in South Florida that a person can’t die in the summer.”   I had the challenge of opening with a funeral in a town of unusual characters which meant that it wouldn’t be the dignified service that one expects.

Definitely Zach!  Mexican food, margaritas in a dive restaurant is my idea of the perfect meal out.  I’d anticipate a sexy game of pool and darts. It would be a pretty fun dinner!

Slice!!  I’d like for him to tell me the story of his life and how he got his cheek to shoulder knife scar.  I’d want to hear about his travels and adventures; how he came to work with Zach and about a day in the life of a tough guy.

It’s a simple question that I’m finding nearly impossible to answer.  In Crazy in Paradise which is my first book I would say they were all my favorites with the exception of a couple of the truly evil ones and they won’t be reprising their roles.  The funeral director, Dickie Vanderbilt, was meant to be a two paragraph character in the first chapter, never to be heard from again.  I decided there was too much good material going to waste.  I brought back him with a flourish in Deception in Paradise.

Usually it’s an idea I can’t get out of my head.  The entire book, main and sub plotlines are character driven, I bring them to life and then I’m off and running, banging on my keyboard!

The quirky characters and story came first but the title came pretty quickly once I started writing.

I take snippets of people I’ve met and conceive a character.  I met a woman a few years back who drank vodka and chain smoked her way through life, thus my character Miss January was born.  I had fun giving her a sympathetic backstory and a most unusual pet.

Whenever I hear an unusual name on television, radio, I make note of it. I’ve named a few of my characters after beer brands.  Whenever I’m at the Costco I go up and down the liquor aisle and make note of any new names.  My character Beck is named after the beer and I have new character Kettle after the vodka.  I have yet to figure out how to incorporate Fat Tire.  I also like the names of old penny candy.  They came in handy naming two dogs Astro and Necco.

Only one problem: First, she has to wrestle control from a conniving lawyer and shady motel manager. With the help of her new best friend, whose motto is never leave home without your Glock, they dive into a world of blackmail, murder, and drugs.