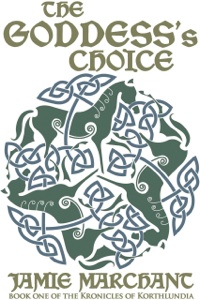 BUY ON AMAZON
Samantha’s ability enables her to discern a person’s character through their multi-colored aura, and Robrek’s makes him the strongest healer the kingdom has seen in centuries. But their gifts also endanger their lives. Royals scheme to usurp the throne by marrying or killing Samantha, and priests plot to burn Robrek at the stake. Robrek escapes the priests only to be captured by Samantha’s arch-enemy, Duke Argblutal; Argblutal intends to force the princess to marry him by exploiting Robrek’s powers. To save their own lives and stop the realm from sinking into civil war, Robrek and Samantha must consolidate their powers and unite the people behind them.

I would like to extend a warm New Adult Addiction welcome to Jamie Marchant, author of The Goddess’s Choice.  I love your cover – I’ve always been a sucker for Celtic design! (and horses!)  She was kind enough to drop by and answer some questions about herself and her book, so please enjoy!  Jamie will be guest posting on Friday, so make sure to check back for that as well!

Since one of my main characters is a healer, I researched herbal remedies and medieval medicine. I don’t have a lot of experience with horses, so I had to research horses and horse diseases. I also researched various facts about medieval life, including court dances and foods. To add additional favor, I researched Celtic gods and goddesses as well as holidays. Sulis is the Celtic goddess of healing, and all the holidays in my novel are based on the Celtic calendar, although I’ve taken plenty of liberties with them and made them truly Korthlundian.

Although it is an adult epic fantasy novel, The Goddess’s Choice is loosely based on a fairy tale, so I had some structure imposed on it to begin with. But the fairy tale is only five pages, and the book is nearly four hundred, so I added a lot! For instance, the story of Samantha—the crown princess and heroine of my novel—is almost completely absent from the fairy tale.

Other than the imposed structure of the original tale, I’m a more fly-by-the-seat-my-pants kind of writer. I never made a written outline or plotted a story arc. I had a basic idea of where I wanted to end up, although I didn’t know exactly how The Goddess’s Choice was going to end until I was nearly there. A lot of where the story goes depends on the characters. They tend to take on a life of their own.

I figure them out some beforehand, but mostly the characters reveal themselves along the way. Robbie—a peasant healer and hero of the novel—I basically knew before I started writing, and he changed  little from the way I initially imagined him. Samantha was a different matter entirely. In the original fairy tale, she is nothing more than a prize to be handed off to the victor. I wanted her to be every bit as important as Robbie, but I didn’t know exactly how to go about achieving that. I made quite a few false starts, and she evolved as I wrote and as I received feedback. As far as the minor characters are concerned, I had the germ of their personalities when I began, but they slowly revealed to me exactly who they wanted to be.

Probably King Solar. The ninety-year-old king has the wisdom of his age and position, and I think he would make a fascinating dinner companion. Also, he is partially based on my grandmother, whom I miss tremendously.

Harry Dresden from Jim Butcher’s The Dresden File. He tends to have a difficult time with women, but he’d have an easy time with me.

ME:  Hehe!  I’ve never read those books but I hear so many good things about them, I might have to start!

Who’s your favorite character in the book and why? Who was the most fun to write?
The most fun to write would definitely be Fancy Man, one of the magical horses. His outlandishness and arrogance made him a joy to write. My favorite character is much harder to choose. There are so many I love and who have become almost alive to me. But if I had to pick one, it would probably be Robbie. I’ve always loved the underdog, and he has lived with me the longest.
When you set out to write a book, are you usually sparked by a story idea or a character?
Usually, I’m sparked by a character and the story idea comes later. With The Goddess’s Choice, it was both. I had the character of Robbie, and I had the original fairy tale.
Which came first, the title or the novel?
The novel came long before the title. I have a hard time coming up with titles, and The Goddess’s Choice was suggested by a member of my writing group.
How do you come up with your characters and their personalities?
I honestly don’t know. For the most part, they aren’t based on people I know. I just have various characters living in my head. I’m always making them up. Most never appear on the page, but when the time is right for a new character, I tap into my imagination and find one.
How do you come up with your character names?
Names are as difficult as titles for me. Samantha was the only easy one; her name was what I was going to name the daughter I never had, so it seemed natural to choose it for my strong, capable heroine. The rest of the names were torture! My writing group members make fun of me because in the earlier drafts, lots of characters had names like Captain Something and Lord Somebody. I wanted exotic names, but I didn’t want the unpronounceable names found in so many fantasies. Eventually, I decided to use Celtic names for all my Korthlundian characters, so I found internet sites with lists of Celtic baby names. At first I tried to match the meaning of the name with the personality of the character, but that became too cumbersome. Whenever I needed to name a new character, I looked over the list of Celtic names and chose one that caught my eye. I used different ethnic groups for other nationalities. For examples, Saloynans have Greek names.
About the Author
I live in Auburn, Alabama, with my husband, son, and four cats. I’ve been told that having four cats officially makes you a cat lady, so I guess I am one. I teach writing and literature at Auburn University.

My first novel The Goddess’s Choice was released in April 2012 from Reliquary Press. I am hard at work on the sequel, tentatively titled  The Soul Stone. My short fiction has been published in Bards & Sages, The World of Myth, and Short-story.me.