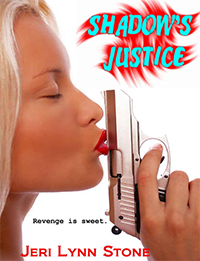 Two days after the State of Louisiana executes her father for the murder of a prominent banker, Shadow McClane buys a gun and vows revenge against the real murderer and on the same day, her stepbrother’s best friend Raven Deveroux pisses her off.
Raven flat out refuses to help her in her dangerous quest. The murderer still roams the streets a free man and the law considers the case officially closed. He calls her a fool for putting herself and her family in further danger.
Embittered and abandoned, Shadow is determined to prove to every last one of the arbitrators that her father was not a murderer, but a falsely accused man of honor. She renews her vow to find the real killer and shove him and the town’s corrupt court system right smack into their self-righteous faces. When Shadow probes her father’s case she discovers her gun is useless against car bombs and she welcomes Raven’s reluctant help after he realizes she’s determined to continue her risky probing without him.
A long-standing attraction eventually reaches new heights between Shadow and Raven, but who in the heck has time to fan the sheets when cars and bulldozers blow up around you, bullets fly over your head and family members and friends interrupt every intimate moment between you? But, they try.
With sheets a ‘floppin.