Looking for some NEW ADULT from the guy’s POV?
Look no further!
Take a trip with Standby, Chicago!

The uplifting story of a young man on his first business trip, the blizzard that could strand him through Christmas, and the beautiful girl he falls for on the flight over. Standby, Chicago is the novel which reminds us that new adventures in life and love are often only a gate away. 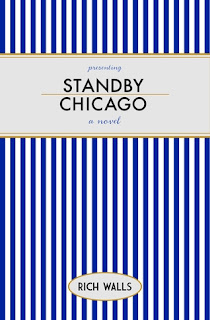 Hi Rich, welcome to New Adult Addiction! In your new book, Standby Chicago, James is on his first business trip.  What made you center your story around this event and how did you come up with the idea for James’s character?
Julie – thanks so much for the invite!
Standby was born, literally, in the air. I was sixteen at the time, travelling by myself between Florida and New Jersey, and I had this hope that maybe for once a pretty girl could sit next to me instead of a snowbird (That’s what they call the Northerners who winter each year in Florida). Of course that never happened, but simultaneously, I’d been getting my first urge to write a novel, and I was thinking that there’s no way I could be alone in that sort of fantasy—of wanting someone amazing to sit next to you on a flight—so I came up with the idea of boy meets girl on a plane right there. I had a best seller on my hands! Of course, it took me six false starts and ten years to get around to writing it, but that’s how it occurred. From there, the business trip was a natural progression and James was the embodiment of it. A good-natured kid who’s just trying to figure out the world as it’s handed to him.

In your young adult book, James is dealing with life after college.  In what ways do you think the new adults of today will relate to James’s struggle?
I hope new adults find it very relatable. It’s the first the job, it’s finding yourself suddenly required to substitute as a full-blown adult. In school, when you perform, it’s on you. In the workplace, when you produce, it’s the livelihoods of others that are at stake, as well. It’s that responsibility. It’s also the maturation of relationships. By twenty-two, everyone’s been in love. But for the most part, love came without expectations. It was a free ticket to the greatest experience of your life, which is why it hurts so much when it comes apart. So then when you’re standing there at twenty-two a little bit bruised, and you know there has to be an even better love ahead, the question is, what does it look like? I hope readers relate to that, the feeling that hits you after life has thrown you a few curves and you’re stuck wondering what kind of love might pull you through.

Spill some secrets about the love interest in Standby Chicago.  Who is the lucky lady and what do you want readers to know about her?
Amy Pattison is the lovely lady who catches James’s eye on that opening flight. She’s a few years older, she’s been around the bend a couple times, and because of that she’s a little bit cynical. She also knows Chicago inside-out and will act as his guide. What else might you like to know? Her favorite color is green, she’s not afraid to show up unexpectedly with a bottle of vodka, and she has a hidden talent.
What is your favorite scene from Standby Chicago?
Yikes. Tough one. One scene I’ll always hold near and dear is actually a conversation James has with an older man at a bar while waiting for Amy. It was the first scene I wrote when I picked up the story again for the final time back in 2008. It has nothing do with Amy, it has nothing to do with his business trip, but it is an example of the wonderful people we meet along the way and stories they can share.
With Amy, I love their first date. To keep the dialogue turning, I introduced a drinking game and it was a lot of fun to write in a scene which already begins with the tension of sitting across from this beautiful girl at this small pub table and then throws in this element of chance as they reveal more to one another. Candles and quarters, chance and certainty. A beautiful girl and an expected trip…what else do you need?
OK, now for some easy ones – what was the first story you ever wrote?
Super Kid. I was in fourth grade at the time and made a couple two page comics for my buddy. Think Superman, but with a kid. Pretty original, right?

What author had the most impact on your writing style?
I think you take a little bit from each. Dave Eggers’s A Heartbreaking Work of Genius was the first book that taught me a book could be relatable. Before that, books were something you read for class. Also, if I could steal a tenth of the heart and optimism he puts into his pages, I’d be pretty proud of myself. Always love reading David Foster Wallace, not just his brilliance, but there’s also a heart there that not enough people recognize. Perhaps most similar would be some of Larry McMurtry’s Texas books—The Last Picture Show or All My Friends Are Going to Be Strangers—just the simplicity of taking these characters out of everyday life and finding something powerful in them.

If you could claim authorship of one book, which one would it be?
The Great Gatsby. My all-time number one.

What advice would you give to young writers who feel discouraged as they try to write their first novel?
Live your life first. If writing is ultimately a method of sharing your thoughts on the human existence, you’re going to learn a lot more about life going out on a Saturday night than staring at a blinking cursor. Eventually, the day will come when you realize you have a book inside you that needs to be written and you will write it. Until then, relax and live a little bit.

What’s up next for you?  Series are very popular these days, do you see Standby Chicago as a series?
I am currently at work on a project called One Page Love Story, which is located, conveniently enough, at www.onepagelovestory.com. Each weekday this year I will be posting a new very short story.
I have thought about a sequel to Standby and have even written very generic outlines on it. At the moment, though, my focus is on One Page Love Story and I’d likely work on separate projects before returning to Standby. It’s a little bit like looking at a first love after a year or longer removed. It will always hold a special place in your heart, but sometimes it feels like the ending you’ve already written is the one that it deserves (even if a sequel does cross your mind from time to time).

Can you give us a taste of your work in progress?  A favorite scene or teaser for the next book?
How about the very first story I wrote for One Page Love Story!

They met in a pâtisserie beside the Seine. Upon entering, he had held the door for her, saying, “After you,” in unmistakable English. To which she replied, simply, “Merci.” Now she orders an apple crêpe to complement her morning tea, he a small loaf of bread for his weekend hosts. When she reaches for her purse, he produces a five-euro note, insisting with his very best, “S’il vous plaît.” Her acceptance comes in the form of a smile which to him seems by equal weights lovely and strangely familiar. It is at this moment that he wonders whether he should ask this beautiful woman to walk with him, perhaps along the river or down la rue. As they exit, however, she turns to him and says, “Don’t you remember? We met once, in New York, three, maybe four years ago. You had held the door for me then, too.  And what I distinctly remember is wishing that I had asked to walk with you.” In a flash, he begins to remember, as well—her and her sun yellow dress awakening that tired, grey morning. “Well,” he says, lending his arm, “I suppose this is our second chance.”

ABOUT THE AUTHOR
Rich Walls graduated from Villanova University in 2006 and published his first novel, Standby, Chicago, in December 2011. He presently lives in Hoboken, New Jersey. You can follow his latest project, a collection of very short stories, at www.onepagelovestory.com.
Buy Standby Chicago at Amazon 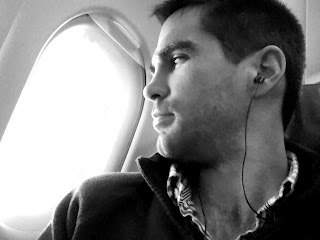 2 Responses to “Interview with Rich Walls – Author of Standby Chicago”