Review of Inescapable by Amy A. Bartol | New Adult Addiction

Inescapable by Amy A. Bartol 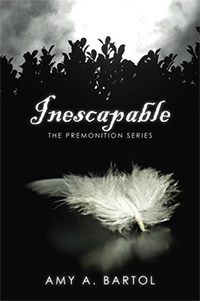 I loved Evie, really she was a delight to read.  I found myself talking to the characters in this book, which is not something I normally do, so that was a surprise.  Mostly, though I just enjoyed this book from start to finish.  I can easily see this as a movie because it is packed with action, is not just a love story/triangle, and it has some interesting new developments on angels.
My only complaint might be Reed.  How, you ask?  How could I have anything bad to say about REED?  And that’s just the point.  He was way too perfect.  He had everything.  I like the boy to be a bit bad and Reed, even though he was a major kick-ass tough guy, was not bad enough for me.  He was too restrained, did not struggle nearly enough, and so felt a little less developed than the girls in the story.
I adored Buns and Brownie as well – the whole field hockey thing was pretty cool and that, of course, sets off the entire book.
I’ve read some other reviews that blasted the slang in the book used by Evie, but I enjoyed her voice. I also enjoyed Uncle Jim immensely, and perhaps Evie’s slang came from her Uncle?  (Those of you who think it was too 80’s?)
OK, about the cover – it really does catch your eye if you’re into angels, and I am.  I write about them as well, except in a much more violent and science fiction way.  Regardless, I enjoy reading other author’s take on the whole angel thing, so that feather got me on the cover right from the beginning.  So simple, yet says a lot!
I am currently reading my way through this series and can’t wait to be ready for the upcoming fourth book!  New Adult Addiction will host Amy A. Bartol in January on her Incendiary tour and so I will hold off on the reviews of the rest of the books until that time.  (Can’t wait!)

About the Author
Author Blog
Author of Inescapable: The Premonition Series (Volume 1), Intuition: The Premonition Series (Volume 2), Indebted: The Premonition Series (Volume 3) , and the soon to be released Incendiary: The Premonition Series (Volume 4).
I live in Michigan with my husband and our two sons. My family is very supportive of my writing. When I’m writing, they often bring me the take-out menu so that I can call and order them dinner. They listen patiently when I talk about my characters like they’re real. They rarely roll their eyes when I tell them I’ll only be a second while I finish writing a chapter…and then they take off their coats. They ask me how the story is going when I surface after living for hours in a world of my own making. They have learned to accept my “writing uniform” consisting of a slightly unflattering pink fleece jacket, t-shirt, and black yoga pants. And they smile at my nerdy bookishness whenever I try to explain urban fantasy to them. In short, they get me, so they are perfect and I am blessed.
Goodreads
Amazon