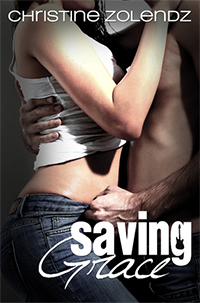 I was captivated by Grace in the first book, Fall from Grace.  I truly appreciated that this was a *real* new adult novel in every sense of the word.  I loved that they acted like normal young people, even if they did drink a little too much.  That’s pretty normal for this age group.  I didn’t even mind that Grace was a virgin because,  unlike some other NA novels I’ve read lately, the reason was pretty clear.  She was saving herself for her one true love.  I get that, I’m OK with that.  The V thing did not bother me in this book.
I also loved the sexual tension.  I really did!  I know that some people are saying that the plot was so hot and cold with Shane and Grace, and yes, after thinking about it, it was.  But I enjoyed the ride anyway.
The only real issue I had with this book is that nothing was really explained.  I didn’t really believe that deus ex machina ending, so that kinda sucks.
With that said, the book was fun, I read it straight through, and I never had the sense that it was a waste of time or money, nor did I ever entertain the thought that I might put it down.

I did deduct a half a star (Fall from Grace got 4.5 stars from me) for the lack of explanation about Gabriel, but I would gladly read more of Mrs. Zolendz’s books in the future and I look forward to her next release.
Amazon
Goodreads
Author Blog