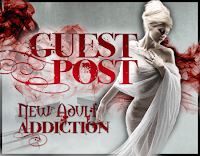 New Adult: The Rest of the Freaking Story
by Regan Wolfrom

There’s something about Young Adult fiction that’s always bothered me: it’s only half the story.

YA is half of the story about what it’s really like to be a teenager; there’s no real sex in its pages, and no one actually says what they’d really say… you know, if it wasn’t being written down to be read by an audience of impressionable youth.

Being a teenager is hard… it’s probably the worst phase of life until that part in your nineties where you break your hip weekly and you’re deliriously happy if you manage to make it to the bathroom maybe half of the time.

Being a teenager sucks.

YA reflects that, relates that, escapes that…

But YA only covers your teens, which is about half of the time it takes to actually grow the heck up and find out who you really are and what you want.

You turn eighteen, you graduate high school, and you become an adult… well, kinda… except that you still feel like a teenager, you still have years of school to go (and now to pay for), and you’re nowhere near living on your own or even being able to rent a car.

Being a new adult sucks.

Sometimes it’s amazing, because you get to see everyone you grew up with make a go of it, and it’s funny and comforting to watch them make mistakes, to watch them quit their job that could have gone somewhere because “my boss is a jerk”, and date that guy with the spider tattoo on his face… it’s nice to realize that no one knows what they’re doing. At all.

I love to read about those times. I love to write about them, too.

And when I write about people who are no longer teenagers, who are moving painfully into real life, I can be honest about the sex they’re having, and I can admit that sometimes people say the f-word and the s-word… and even the c-word, and I don’t have to deny that sometimes life doesn’t have a message, that sometimes the world doesn’t make sense. 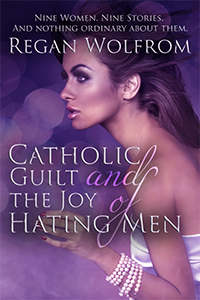 My first venture into New Adult is my dark and funny contemporary fantasy/horror collection, Catholic Guilt and the Joy of Hating Men.  It’s weird, it’s fun, and it might be scary at times, and I don’t think people know just what to make of it. That’s pretty much how most of us feel once we finish being teenagers and realize that we’re years away from really growing up.

We don’t know what to make of it.

Author Blog ~ Amazon
Smashwords ~ All Romance
ABOUT THE AUTHOR

Regan Wolfrom (born at the tail end of the disco era) has come a long way from his 1986 debut novel Harry the Adventurous Hamster (currently out of print due to having never been published or completed). After a break from writing to attend puberty, and to eventually sell six packs of Molson Canadian to his misnamed crush, Moosehead Girl, Regan returned to the craft with reckless abandon and a gallon jug of iced tea with just a smattering of extremely cheap rum.

Regan is now the author of numerous short stories and an upcoming post-apocalyptic novel series with only one mention (so far) of zombie erections. Regan hopes to one day write a novel set on Mars while sitting in his boxer shorts on the actual Red Planet, and everything that comes before that is really just his way of saving up for the one-way trip.

Though Regan has been shafted by residency requirements in his pursuit of the MacArthur genius grant, his current fiction is considered to be of high caliber, reflecting a marked improvement in style and grammar from the aforementioned thing with the hamster. It also has far fewer graphic scenes of pound puppy plushes having sex in the back of a shoebox with paper wheels.

What does Regan have to say about Regan?

“I recently passed up the chance to hassle Samuel L. Jackson.”
“I’ve always wanted to change my name to something boring, like Hugh Howey.”
“I know how to cook six things. None of them are oatmeal.”
“I write stories that are weird, a little dark, and definitely inappropriate for my children. It could be tough to keep that going when they get to be as old and weird as I am today.”
“Oh… and my dog is in love with me… like… in a disturbing way.”

For a more in-depth tour of Regan’s unresolved childhood issues, be sure to read one of his stories.