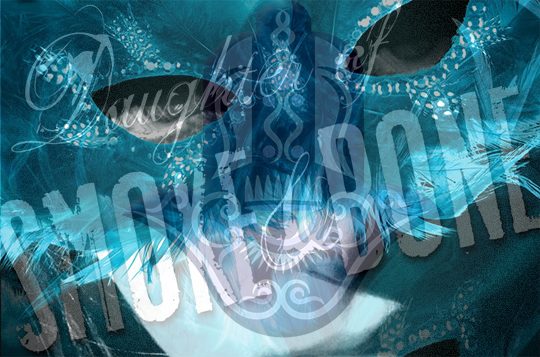 Daughter of Smoke and Bone (DOSB) is the first book in the angel-apocalypse fantasy series by Laini Taylor. I read this book back when it came out because I was drawn to the cover. Yes, I admit it – I DO judge a book by its cover.
But I was quickly engrossed in Karou’s fantastical real-life of chimeras, wishmongers, and angels. I love a good angel story and DOSB is a very good start to an enthralling angel story. 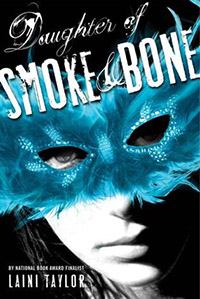 Karou is an art-student living in Prague, she has a best friend named Zuzana, an ex-boyfriend who thinks he’s a street actor, and is the foster-daughter of a chimera called Brimstone. He’s the Devil, they say, but Karou only knows him as Brimstone. The creature who took her in and cared for her as a baby. A chimera is a combination of animals and human and there are more fantastical combinations that I can even remember.
Karou also has a job with Brimstone, you see he’s interested in training her up in the family business, which I cannot in good faith tell you about in this review, but take my word for it – it’s pretty darn cool IF you’re a chimera. But also somewhat disgusting and yes, evil, in what she needs to acquire for Brimstone to do this job, if you’re not a chimera.  It’s black-market stuff, requiring a debt of pain, and the promise of immortality – of a sort.
The first half of this book is all about Karou meeting up with an angel called Akiva, who’s on mission to close all the portals Karou’s foster family uses to travel into the human realm. Did I mention this was a fantasy? There are two worlds – one where chimera and angels live and the one where Karou and the humans live. Brimstone allows Karou to travel around the human world via these door portals, but Akiva’s dead set on closing them all down.
Thus we have the central conflict – Karou – the blue haired foster-daughter of Brimstone the Wishmonger  Devil – and Akiva, the bastard son of the ruling angel and soldier who’s only purpose is to kill chimera – are on opposite sides. The angel and the devil, as the description begins.
Most people who read the book loved it – and I am no exception. This a five star read – 100% 5-star world-building, 100% 5-star character development, and 100% 5-star plot. But those who did have a problem with it, all said the same thing. We loved the first half about Karou, but not so much the second half about Madrigal. I won’t get into it, it’s a spoiler. But I have to agree on the first read, this did bother me a little. But then I re-read the book in anticipation of reading the newly released second book Days of Blood and Starlight.
And I take it all back. Every less than perfect thought I had about this book was washed away on a re-read and by the time I finished Days of Blood and Starlight, I was 100% on board with everything!
I’m not going to review the second book here because I want to make sure each book has their own post, so I’ll end this review now. If you start Daughter and feel a little bogged down towards the end, don’t give up. It’s magical once you start fitting the pieces together in Days.

2 Responses to “REVIEW: Daughter of Smoke and Bone by Laini Taylor”