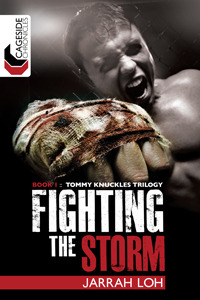 Cageside Chronicles: Tommy Knuckles Trilogy Book 1  by Jarrah Loh
The young adult fiction series for the warrior at heart! This is the book series that UFC & MMA fans have been waiting for!
Tommy lowered his head again. “I’m not a fighter,” he said.
“Maybe you are, maybe you ain’t,” shrugged the man. “Maybe you just don’t know it yet.”
The saga begins with the lonely Mexican teenager, Tommy, who’s been beaten up his whole life. But when ghosts emerge from his dead father’s boxing past, a new world of adventure, love and pain awaits as he learns to fight his way across the border to his father’s homeland, and into the famed cages of Las Vegas.
REVIEW:

I picked up the Tommy Knuckles Trilogy a few weeks ago after stumbling onto this unusual look at new adult life from a boy’s perspective, something I think we are severely lacking in the current NA market.  At first I was drawn to it for myself, since I sorta like that MMA fighting stuff, but then I saw it was classified as young adult and started thinking my son would like it.  He’s fifteen, and we start the story when Tommy is sixteen, so it’s the right age for him.  Unfortunately, he’s off the Kindle right now.  Refuses to read on it and only wants paperbacks.  Whatever.  Teens, right?

So I decided to read the book anyway, and I’m very glad I did.  I admit I was fearful that it might be predictable, especially when a boxing hero who was raised in Tijuana, where this story starts, returns from the US as a successful, rich fighter.  Add in the fact that he was there to choose some apprentices and that he’s a family friend and I figured this was Tommy’s easy in.  Because you know in the real world, this IS how it works.  Who you know is often far more important than how well you do something.
But I am delighted to say Tommy was very far from being handed anything in this story.  Loh made him work and I loved that about the story.  I also appreciated that his tasks were not insurmountable, Tommy was, after some serious coaching, a natural.
I enjoyed Tommy’s journey as he was shaped into a boxer, I loved it when the real world of street fighting rears up and literally kicks his ass.

Which leads him to mixed martial arts (or  MMA for those of you not familiar – cage fighting), and a desire to be better, learn more, and endure a trip to the US via coyotes.  When he finally arrives in Vegas it’s not the dream world that he imagined and he struggles with the culture shock and the lack of family and friends for the first time in his life.
This story had just the right amount of everything in my opinion – the right amount of luck, hard work, dismal situations, lessons learned, and even romance.  I love the last sentence of the book.  I will definitely read the next two as well – I’m hooked on Tommy Knuckles.
Also – as an aside – I enjoyed the fact that there is some discussion about the degeneration of Tijuana over the years.  I spent my teens and twenties living in San Diego, so a quick trip to TJ was just something you did on a Friday night.  We walked across the border and walked back in the middle of the night.  It was safe, it was fun, and we bounced around Avenida Revoluciónlike, well, like Americans out to get drunk in TJ on a five dollar bill.  I haven’t been back in a long time but I’ve heard it’s no longer that place.  So it was nice to read about it in this story and think about those memories.  I could literally see the corner drugstore when Loh wrote about it.
This book is a five star read for teen boys, and even girls.  It’s got the appropriate amount of violence to get the messages across, no sex, and no cussing that I can remember.  A clean read filled with life lessons that any teen can take with them as they move into adulthood.
Author Website ~ Amazon ~ Twitter ~ Goodreads
ABOUT THE AUTHOR: 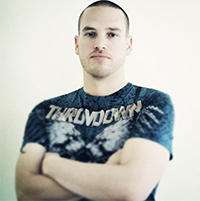 He is the author of the HarperCollins book Ultimate: The Complete Guide to UFC and Mixed Martial Arts and is also the creator of the fiction book series that MMA and UFC fans have been waiting for: Cageside Chronicles.

He currently lives in Melbourne, Australia, with his wife and daughter.

One Response to “REVIEW: Tommy Knuckles Trilogy by Jarrah Loh”