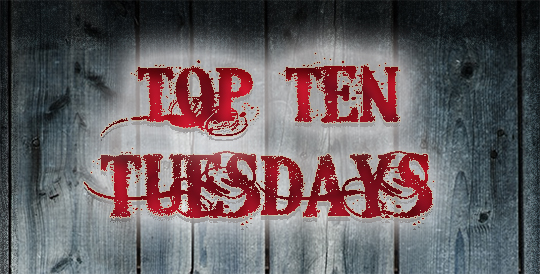 Top Ten Tuesday – is an original feature – weekly meme created by The Broke and the Bookish and exists so that everyone can share their love of lists with other bookish peeps!
For future Top Ten Tuesday topics & info on how to participate click here! 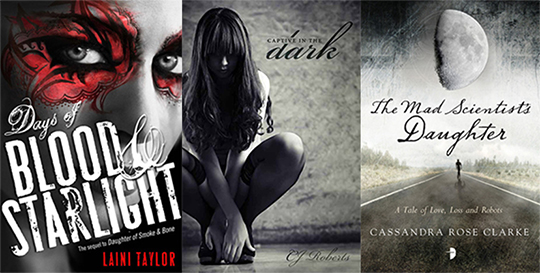 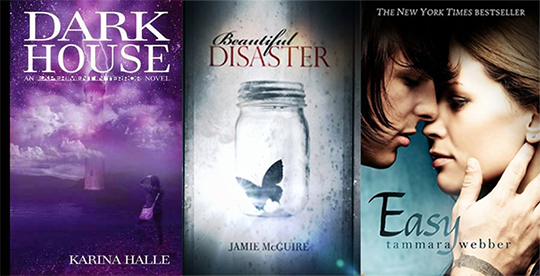 1.  Days of Blood and Starlight by Laini Taylor – this was, hands, down, the best book I read (besides my own, of course) in 2012.  I had mixed feelings about the first one, not really enjoying the back story as much as the present story, but this book changed all that for me.  I never did connect with Karou’s old self, but I did appreciate the multiple points of view a little more this time around.  I‘m really looking forward to the next book and I sincerely hope she’s hard at work producing it.  That’s one thing about traditionally published books that still ticks me off a little – how freaking long it takes for the next book in a series to be released.

2.  Captive in the Dark and Seduced in the Dark – by C.J. Roberts – These two books totally blew me away.  It was the stuff nightmares are made of, a total train wreck, a disgusting look inside human trafficking.  And I could not stop reading it.  It was dark, gritty, and disturbing.  But wow.  I just could. Not. Stop. Reading.  And it was the story-telling that did it, not the subject matter or the genre.  C.J. Roberts can weave a tale, and she can do it well.
3.  The Mad Scientist’s Daughter by Cassandra Rose Clarke – this was a love story between a girl and a robot.  I know, it’s strange.  But it’s just a tragic look at what makes people – well people.  What makes things alive, worth loving, and so much more.  This is one of those books, like Days of Blood and Starlight, that stay with you after you read it.  Where you just think about it for a few days and can’t get it out of your mine. This book isn’t even out yet, so I’m not sure it qualifies for this list, but I read it in 2012, so I’m including it.

4.  Beautiful Disaster by Jamie McGuire – This was the first “official” new adult book I ever read.  It was captivating, nothing earth-shattering, and when looking back on it in comparison to Easy, not even as well plotted.  But it held my attention and lots of things changed for me as far as what I was reading at the time.  So it was an important book for me this year.

5.  Easy by Tammara Webber – I read this book after Beautiful Disaster, in fact well after.  It was better plotted and had more reasonable scenarios, but it was also a lot more serious.  I enjoyed the well-developed characters and  the romance, but some of it was a little too practical in places.  I get it, the subject matter is delicate, but it turned the book into something less fun and more emotional than Beautiful Disaster.

6.  Darkhouse by Karina Halle – This is the first book in the Experiment in Terror series and is hands-down one of the funniest books I’ve ever read.  I fell in love with the main character, Perry Palomino, and I’m reading my way through the rest of the series now.  These are books I read only for fun, even though I do review them when I’m done.  I pick up a Karina Halle book when I’m looking to relax.  She’s like Dean Koontz – you know you’re going to have a well-written story that captures your attention.

7.  The Plot Whisperer by Martha Alderson – this book taught me how to plot a story.  It was literally the light bulb moment for me as a fiction writer.  It just makes so much sense, I can’t believe I didn’t figure it out before then.  I don’t use it all that religiously now, but when I was writing Clutch, I plotted that thing out more than two dozen times according to this book.  I found it after I’d completed two drafts and was still very much unsatisfied.  She has a YouTube series too, and after watching all 26 (or so) episodes, I was ready to get to my final draft.  Of course, my editor had her way with the story as well, but Martha Alderson’s book was what got me started.

8.  Story Engineering by Larry Brooks – If The Plot Whisperer is the feel-good way to plot a story, then Story Engineering is the scientific way.  I learned a lot from both, actually, but SE gives you a little more than TPW in terms of plot points and hard-core structure.  When I have a plot issue now, I turn to this book which I purchased in both e-book and paperback so I could access it easily.

9.  20 Master Plots and How to Build Them by Ronald B. Tobias – not really a how to book, but it does give you a decent break-down of the twenty (so he says) main plot ideas that are used over and over, with a different spin each time.  Almost all stories can fit into one of these plot categories which includes Quest, Adventure, Pursuit, Escape, Revenge, Rescue and many others. It gives you a good idea of what each of these plots consist of, but nothing like Story Engineering.

10. And finally – GMC: Goal Motivation, and Conflict by Debra Dixon – this book is all about creating characters with depth.  This book is how I planned Tier and Junco in the I Am Just Junco series.  When I pull out those charts I did back then (a year ago to be precise!) and I compare how these two characters started verses where they ended up, not much is the same.  They have their same names, they have their same basic characteristics, but all of their motivations changed as the stories took on a life of their own.  It’s quite satisfying to look back on it, actually.  They came out so much better than I planned.

Top Ten Books Read Before I was a Book Blogger

Top Ten Settings I’d Like To See More Of