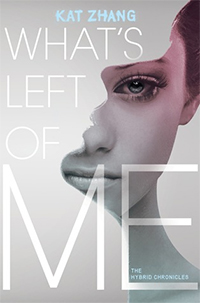 I should not exist. But I do.
Eva and Addie started out the same way as everyone else—two souls woven together in one body, taking turns controlling their movements as they learned how to walk, how to sing, how to dance. But as they grew, so did the worried whispers. Why aren’t they settling? Why isn’t one of them fading? The doctors ran tests, the neighbors shied away, and their parents begged for more time. Finally Addie was pronounced healthy and Eva was declared gone. Except, she wasn’t . . .

For the past three years, Eva has clung to the remnants of her life. Only Addie knows she’s still there, trapped inside their body. Then one day, they discover there may be a way for Eva to move again. The risks are unimaginable-hybrids are considered a threat to society, so if they are caught, Addie and Eva will be locked away with the others. And yet . . . for a chance to smile, to twirl, to speak, Eva will do anything.

This book has a very thought-provoking premise – what if you were born with two souls, like a twin, but they lived inside you?  And then what if only one of you was allowed to live past a certain age?

I like this premise and I can tell you it made me quite uncomfortable all the way through.  Not the fact that my twin soul would be killed…but that I would have to share myself with someone else.  It was disturbing.  I was totally on Addie’s side the whole time.

OK, let me explain – Addie is the “dominant soul” who has control over the body that her and Eva, her twin, should inhabit.  Most kids “settle” by the first or second grade and that’s when the twin souls turn into just one.  One soul takes over and the other fades away.

Except that’s not how it happened for Addie and Eva.  They took a very long time to settle, not until they were twelve, in fact.  Except they never did settle.  Eva was still very much present, only she was trapped inside Addie’s body.  She couldn’t’ move or talk or anything.  Her parents stopped talking about her and pretty much everyone just pretended that the weak soul never existed.

Pretty freaky.  This story is told from Eva’s POV, but honestly, all I could think about was Addie.  How awful to have another person inside of you.  I don’t know, I’m pretty sure that was not the intention.  It was weird.


Anyway, when the two souls refuse to settle, the child is called hybrid and they are labeled dangerous and sent off to “institutions.’ Now, this was explained and I bought it, so I’m not sure what the other reviews are referring to.  Hybrids are supposed to be a danger because the two souls can never be at peace, they tend to fight and be violent and start wars. They are a danger to society.  OK.  I buy that.  It’s plausible.  I really would not want to be a hybrid myself.  I’m OK with that premise.

The second thing some reviewers were giving a negative was the backstory.  This story is really a very near future alternate history of the US.  They have Founding Fathers and Great Wars, except everything was fought over America being a hybrid-free zone instead of a bastion of personal freedom.

I bought that too.  Plausible.  It wasn’t well defined but the history comes from a teenager’s POV.  What do readers expect?  I dunno, I had no issue with it.
Needs Improvement:

The only thing in this book that made me say – OK what the heck – was the fact that Addie and Eva would jeopardize themselves for people (other hybrid kids) they barely know.  I’m all about saving others, but you can’t save others if your butt is in prison.  So, you know, maybe they should rethink that whole “let’s be a hero” tactic in the second book.  Also, experiencing Addie’s discomfort with Eva’s choice in boyfriends was unnerving. I agree – TMI – even for a twin soul.

This story was a clean read with no sex, no swearing, and very little violence, even if what they do to the hybrids in the institution is horrible.  A solid 4 star story and I will definitely pick up the next one.

4 stars for Kat Zhang’s What’s Left of Me. 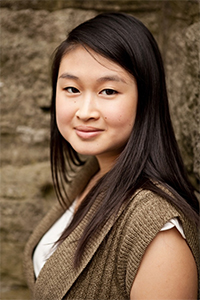 Kat Zhang spent most of her childhood tramping through a world weaved from her favorite stories and games. When she and her best friend weren’t riding magic horses or talking to trees, they were writing adaptations of plays for their stuffed animals (what would The Wizard of Oz have been like if the Cowardly Lion were replaced by a Loquacious Lamb?). This may or may not explain many of Kat’s quirks today.

By the age of twelve, Kat had started her first novel and begun plans for her life as a Real Live Author (she was rather more confident at twelve than she is even now). Said plans didn’t come into fruition until seven years later, when her agent sold her trilogy, The Hybrid Chronicles, to HarperCollins. The first book, What’s Left of Me–about a girl with two souls–will be released September 18, 2012.

Kat is represented by Emmanuelle Morgen of Stonesong. She also performs as a Spoken Word poet and contributes to Pub(lishing) Crawl, a site for aspiring writers to talk about books, storytelling craft, and the publishing process. Kat has also had the pleasure of remote interning for a literary agent, specializing in Young Adult fiction.

When she is not exploring the world of her characters, she is exploring her own. To date, she’s had the pleasure of visiting five countries, including more than half of the United States. She hopes to always keep writing and traveling.

2 Responses to “REVIEW: What’s Left of Me by Kat Zhang”