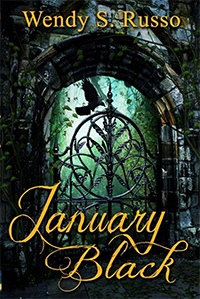 Sixteen-year-old genius Matty Ducayn has never fit in on The Hill, an ordered place seriously lacking a sense of humor. After his school’s headmaster expels him for a small act of mischief, Matty’s future looks grim until King Hadrian comes to his rescue with a challenge: answer a question for a master’s diploma.

More than a second chance, this means freedom. Masters can choose where they work, a rarity among Regents, and the question is simple.

What was January Black?

It’s a ship. Everyone knows that. Hadrian rejects that answer, though, and Matty becomes compelled by curiosity and pride to solve the puzzle. When his search for an answer turns up long-buried state secrets, Matty’s journey becomes a collision course with a deadly royal decree. He’s been set up to fail, which forces him to choose. Run for his life with the challenge lost…or call the king’s bluff.

January Black was a total surprise for me. I didn’t quite understand if it was a fantasy or a science fiction read for most of the book. I suspected SF, but I’m not going to tell you that in this review. Most of the fun in this book comes from trying to piece together the very elaborate puzzle that is January Black.

I really liked this book – I loved the characters. I felt all of the main ones: Matty, Iris, Matty’s parents, and Hadrian were all very well developed.

The mystery was intriguing – I loved how Wendy Russo weaved in all her secrets throughout the book, how she incorporated just enough to keep you reading, while never actually divulging much of anything. I was guessing for most of it and that’s pretty hard to make me do.

This book is not an easy read – you have to want to learn the secret and you have to pay attention to the clues – but for me, that was not a problem. I was drawn into Matty’s world quickly and I enjoyed my time there.

I think the author did an excellent job at world building – you never quite know where you’re at geographically in this book – that’s part of the mystery. I suspected it from the beginning, but there was no way to know for sure until the secret was revealed. And I was not sure – sometimes an answer to a major question is withheld by the author but you just know that’s the answer – but my suspicions were never so powerful that I felt confident I knew that secret.

Ms. Russo also incorporated a lot of themes in this book such as character development, what is and isn’t an education, and liberty – mostly it’s about things that are relevant today but generally not talked about. In fact, I feel that some of what is written in this story actually mimics what’s happening to America right now. People are comfortable, they think they are free, they think this so completely that they fight for the things that make them not free. It’s a lesson, unfortunately, not one that most people will learn.

Also, the technology in this story was fantastic.

January Black starts with the characters at age sixteen, so it’s a YA book, but it occurs over a couple years so it sorta morphs into a new adult book. All in all though, a clean read from my perspective. The two main characters, Matty and Iris, have a very sweet long-term relationship that develops naturally into one that is more serious. Both characters are of high moral standard yet both also have just enough edge to them to make them feel real.

I was provided a free copy of this book in exchange for an honest review. 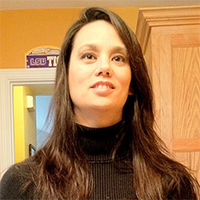 Wendy S. Russo got her start writing in the sixth grade. That story involved a talisman with crystals that had to be found and assembled before bad things happened, and dialog that read like classroom roll call. Since then, she’s majored in journalism (for one semester), published poetry, taken a course on short novels, and watched most everything ever filmed by Quentin Tarantino. A Wyoming native transplanted in Baton Rouge, Wendy works for Louisiana State University as an IT analyst. She’s a wife, a mom, a Tiger, a Who Dat, and she falls asleep on her couch at 8:30 on weeknights.
AUTHOR LINKS
FACEBOOK
WEBSITE
TWITTER
GOODREADS

One Response to “REVIEW: January Black by Wendy S. Russo”