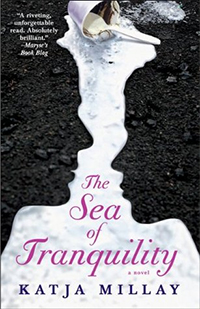 The Sea of Tranquility is a rich, intense, and brilliantly imagined story about a lonely boy, an emotionally fragile girl, and the miracle of second chances.
REVIEW:
Where to start with Sea of Tranquility…OK, I’ll just get it out of the way. FIVE FREAKING STARS. If that’s all you need to know, then you can stop reading. This book is up there with one of the best all time books I’ve ever read. The characterization is exceptional, the romance is both heart-breaking and touching. The conflict was completely original and Nastya Kashnikov is a girl you will never forget.
This book stayed with me for weeks – I actually read it a while ago, but I was on an editing deadline and had all kinds of other projects going on, so this got pushed back – several times. And I’m glad – because I love this book as much now as I did when I finished it. And the ending – OMG I was blown away by the last sentence. It was a puzzle piece I had forgotten about, but it slammed me. Just perfect.
I don’t want to give away the plot too much because unraveling the secrets in a natural way will make you enjoy this book so much more. So if you’ve not read other reviews on this book – DON’T. Just get it and read it. Don’t read the reviews!
There are three main characters in this book – Nastya, Josh, and Drew. And I know what you’re thinking – that’s a love triangle, but it’s not. It’s perfect. Everything you think about these characters as you begin the story is wrong. Everything. This is the beauty of how well written this book is – the personalities of each of the three characters is revealed in just the right amount at just the right time.
Nastya is amazing – I love her spunk, her drive, her ability to run, her hard-ass persona, and the way she wears high heels to school, gets one stuck in a crack in the sidewalk, and then pulls of the perfect recovery. She’s as real a heroine there is – I was crushed as her story was revealed…simply crushed.
There were a few confusing spots for me – one was the beginning with Josh, but it all fit together in the end. I loved that you get two points of view in this novel – I loved hearing how patient Josh was with Nastya as well as how he managed to peel away her layers and figure her out. He shows how he cares about her in very small, but very deep ways. He takes her shopping with him, he builds her something, he respects her privacy – of course, that’s after he tried to get rid of her. But Nastya won’t be deterred – she’s on a mission to figure him out as well.
At first I could not figure out if Drew was a good guy or an asshole…LOL…but getting to know him and his family – especially how his parents were so traditional and had really brought him up to be a gentleman – was a treat I never expected. I love how my opinion of Drew kept changing.
Again – this is a five star read, I loved it and if I could give it more than five stars I would. I hope Katja Millay is hard at work on another book because she is an amazing writer.
AMAZON
GOODREADS

ABOUT THE AUTHOR
I grew up in Florida where I spent my time hiding from the sun. Then I moved to NYC where I attended film school at NYU and spent my time hiding from the rats. I was a high school film production/screenwriting teacher in a former life and now I sit at my kitchen table writing stories and ignoring the frightening mountain of laundry threatening to overtake my home. The Sea of Tranquility is my first novel..
AUTHOR LINKS
TWITTER
GOODREADS

7 Responses to “REVIEW: The Sea of Tranquility by Katja Millay”