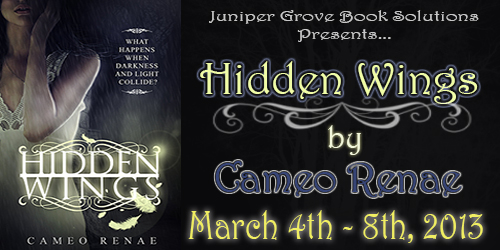 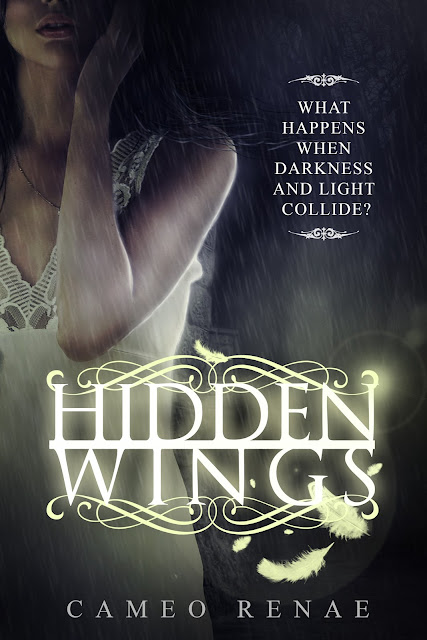 Seventeen is a life changing age for Emma Wise.
As her family’s sole survivor in a car crash, she is left with a broken arm and a few scrapes and bruises. But these are only outward marks; inside, her heart is broken and the pieces scattered.
Whisked away to Alaska, to an aunt she’s never met, Emma starts over. Secrets unveil themselves and now…she doesn’t even know who or what she is.
A centuries old prophecy places Emma in the heart of danger. Creatures of horrifying and evil proportions are after her, and it will take Emma, her aunt, and six, gorgeously captivating Guardians to keep her safe. But, if she can survive until her eighteenth birthday… things will change.
Amazon | Goodreads
REVIEW:

Hidden Wings was a fast-paced thrill ride of an adventure that takes place (mostly) in Alaska. I’ve read a lot of books based in Alaska lately, and I love that. I have a thing for Alaska. I also loved the house where Emma ends up in Alaska – talk about nice! It had a creepy Overlook Hotel hedge maze in it even! In this story Emma loses pretty much her whole life after a devastating car accident and ends up being ushered away to Alaska to live with a long-lost aunt. Or so she thinks.

Her aunt, named Alaine, is new to Emma – why has she never heard of this woman, why did her mother never mention her? Well, this book has a lot of secrets but I’ve give you a hint and say that Emma isn’t what she appears to be on the outside.

The fun starts for Emma as soon as she leaves the protective custody of the hospital where she’s been recovering from the accident. She’s picked up by some cute guys and in fact, that is a theme throughout this book – lots of very cute guys. But as soon as she gets tot eh airport she is attacked.

This is just the first in a long string of bad luck for Emma – I can’t say much more without giving away some secrets, but it’s all pretty traumatic and filled with fight scenes.

I liked this book but I didn’t love it. It was fast-paced and I do love that, but I had a hard time really connecting with the guys. There were some cool twists along the way and it has a very good ending. I think the next book will be interesting and I look forward to it. I hope that the relationships are explored a little more in the next book as well, I think this was what brought the rating down the most for me.

Excerpt:
“Thanks guys. I’m gonna miss you SO much,” I said, as tears stung my eyes again.
“We’re going to miss you too! What are we going to do without you our last, crucial year? We’re finally going to be seniors,” Lia said, her eyes tearing as soon as she saw mine.
Jeremy looked at me, and a single tear grazed his cheek. He quickly turned away and lifted his glasses, quickly wiping his face with his shirt. That was the first time I’d ever seen Jeremy get emotional.
“You guys will be fine. And it won’t be forever. I promise to email and send pictures.”
“You better,” Lia said, wagging her finger at me.
And then… something happened. A sudden euphoric feeling; an unexplainable heat shot through every cell in my body. My pulse quickened, along with my breath, and tingles pricked my skin. A rush of adrenaline flooded my veins and my surroundings began to haze. I grasped onto the edge of the bed, taking in long, deep breaths.
“Hey, are you okay?” Jeremy asked, scooting over to me, grabbing hold of my shoulders.
“Emma, what’s wrong?” Lia called, jumping behind me, pounding my back.
Hello! I’m not choking! I wanted to speak those words, but I couldn’t answer them. It was like all the breath had been sucked out of my lungs.
Then…there was a knock at the door, and we all turned to look.
About the Author: 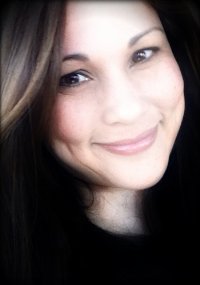 Cameo Renae was born in San Francisco, CA, was raised in Maui, Hawaii, and recently moved with her husband and two teenage children to Alaska.
She loved reading from as long as she can remember. C.S. Lewis’ – Chronicles of Narnia – sparked a fire in her soul which made her want to create her own wondrous, magical worlds, and awesome characters to go on adventures with.
Writing is her passion, and right now, her head is stuck in the YA genre. Her debut novel, In My Dreams, was picked up by Crushing Hearts and Black Butterfly Publishing and was re-published December 14, 2012.
Her newest novel, Hidden Wings (Book 1 in the Hidden Wings Series) was also published with Crushing Hearts and Black Butterfly on January 18, 2013.
One day she hopes to find her own magic wardrobe, and ride away on her magical unicorn… Until then… she’ll keep writing!
Amazon Author Page | Facebook | Twitter | GoodReads | Blog | Website
Giveaway Details:
There is a tour wide giveaway. Prizes include:
·    One (1) Signed print copy of Hidden Wings
·    One (1) Hidden Wings themed bracelet
·    Two (2) eBook copies of Hidden Wings
·    Five (5) Signed Hidden Wings Bookmarks
·    One (1) Handmade Hidden Wings Bookmark
Giveaway is International. 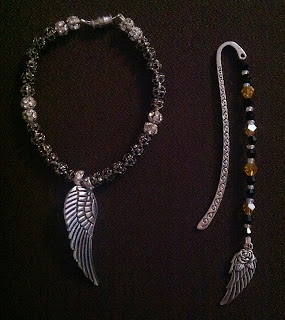 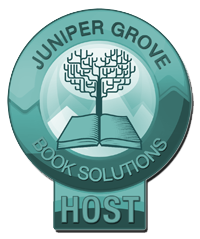 3 Responses to “REVIEW AND GIVEAWAY: Hidden Wings by Cameo Renae”