REVIEW: It Was You by Anna Cruise | New Adult Addiction 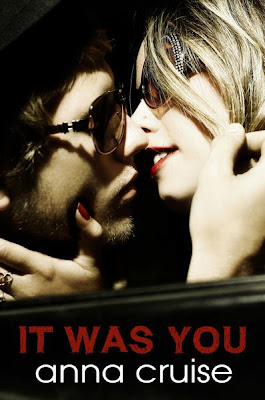 Abby Sellers knows what she wants.

Enduring eighteen years in the shadow of her identical twin sister, Annika, she wants a fresh start. A chance to create her own life, separate from her conniving, deceptive twin.

Surprising both her family and friends, Abby ditches her plans for college and enrolls at a new school instead. There, she encounters West Montgomery, a sexy fellow student who immediately disarms her with his good looks and charm. West takes a liking to Abby and she suddenly finds herself walking a thin line, fabricating a fictional life created not by lies but by omission. She soon discovers West has secrets of his own, secrets that he’s not altogether interested in sharing.

But West isn’t willing to let her go that easily. When he forces her to confront secrets they’ve both been hiding, Abby must decide more than if she’s willing to forgive and forget. She must also decide just what kind of life she wants…and who she wants to live it with.

First off, Anna Cruise gets the award for best new hot dude name.

Say it with me. Weeeeessst.

Mmmmhmmm. It’s hot. And so is he. But that’s just one of the many things I loved about this book. Let’s talk setting. It Was You takes place in San Diego and I lived in SD for a pretty good chunk of time over the years, so all the little local shout-outs were fun for me. From PB to TJ to the rolled taco stand (we all know what place that is…Oh, God, if I could get those freaking rolled tacos in Colorado, I’d be a happy girl). Getting drunk in PB, hitting the tacos, and eating them on the beach is just another Saturday night in San Diego. I loved that. So much.

So here’s the set up: Abby has an evil twin named Annika. Trust me, she’s evil. And she crosses Abby’s line for the last time, making Abby decide to forgo her first year of college at State and instead enroll in the local community college…Harvard on the Hill aka Mesa CC. I’ve been to Mesa, so I could totally picture that hike up the stairs and that massive parking lot where the whole first real meet-and-greet scene takes place between Abby and West.

Here’s where things get interesting. Abby wants to keep her life secret from West because of that nasty sister of hers is always breathing down her neck trying to ruin her life, steal her boyfriends and just generally make her miserable. West has his own secret, so the two of them begin to get to know each other, but they each leave out some critical information that complicates things later on.

I don’t do spoilers, so you’re getting none of that from me. It Was You is a fun, quick read (I read it in one sitting) that has everything going for it. I’m giving it five stars but before I end this review, I’d like to start trying to figure out why I enjoy one book over another, and with this book I think it’s writing style.

Yes, I liked the story, the whole new twist on the twin relationship was awesome. And yes, I liked Abby because she’s a good girl without being too good. And West was rough and tough, but smart and practical. None of these characters acted stupid, it was all very believable. But back to the style – this story was just easy to read and not all authors can pull that off. It’s a skill. It says that Anna Cruise knows which words to use to get her point across, she doesn’t fluff up her sentences to make them prettier, she strings all the right words together in just the right way.

Style has been trumping a lot of things for me lately because I’ve noticed that that even though some stories have all the right components of a romance (or thriller, or mystery, or SF – whatever) if the style is not to my liking, I get bored very fast. I want to be able to read quickly, and I’m not saying that I don’t want descriptive words, I like some pretty purple prose just as much as the next person. For instance, Laini Taylor writes beautiful sentences in her Daughter of Smoke and Bone series, but she flows. Her sentences, while long and pretty, are peppered with just the right words of just the right length, to give it a rhythm that is easy to read.

Maybe some authors don’t think about this, and maybe it’s not even something you can change without considerable effort, I’m not sure. But I like it, and now that I’ve discovered this is what drives me to like one story over another, I’ll be on the look-out for it.

Five stars for Anna Cruise’s It Was You because it had an original twist to an old plot, believable characters, a super fun setting, and an awesome writing style.