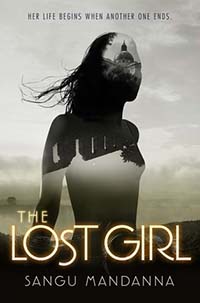 Eva’s life is not her own. She is a creation, an abomination–an echo. She was made by the Weavers as a copy of someone else, expected to replace a girl named Amarra, her “other,” if she ever died. Eva spends every day studying that girl from far away, learning what Amarra does, what she eats, what it’s like to kiss her boyfriend, Ray. So when Amarra is killed in a car crash, Eva should be ready.

But sixteen years of studying never prepared her for this.

Now she must abandon everything and everyone she’s ever known–the guardians who raised her, the boy she’s forbidden to love–to move to India and convince the world that Amarra is still alive.

What Eva finds is a grief-stricken family; parents unsure how to handle this echo they thought they wanted; and Ray, who knew every detail, every contour of Amarra. And when Eva is unexpectedly dealt a fatal blow that will change her existence forever, she is forced to choose: Stay and live out her years as a copy or leave and risk it all for the freedom to be an original. To be Eva.

From debut novelist Sangu Mandanna comes the dazzling story of a girl who was always told what she had to be–until she found the strength to decide for herself.

This book started out with a very poetic literary quality.  Let’s translate that – it has rambling sentences that are more beautiful than plot-moving.  Which is fine.  I actually give the first part of this book an enthusiastic five stars.  I enjoyed the world, even if most of it was not in the least believable, and I enjoyed Eva, her strength, and her guardians.

I think the love story between Eva and Sean started out as one of the most beautiful romances I’ve ever read.

“No,” he says quietly.
I stare at him silently, my throat tight and my eyes raw. “No,” I repeat, wrapping my arms around my knees. “I see.”
He crosses the room and comes to me, his feet brushing softly against the floor. I look up at him. He touches my face with his thumb. “I’d rather spend the rest of my life without ever seeing you again,” he says, “than watch them destroy you because of me.”

Wow.  That was very powerful to me.  It was noble and heartbreaking at the same time.  And Sean continues this for a good portion of the book.

I’m a SF writer and reader, so I’m willing to go with pretty much anything as long as the author can convince me.  And so even though the entire premise of this book is pretty far-fetched, I think Mandanna pulled it off in the first half of the book.  I could buy into all the Weavers and Loom stuff, even the ability of Eva to stay hidden from society.  But the second half was just one lucky break after another.

I’m not sure what happened to the last half of this book – and I can get past the fact that India was pretty much a little America – I mean, I have no idea what India is like – I know they speak English there and they are a quickly developing nation, but it was very Americanized.  Even so, I accepted that as the truth in the story because it’s Mandanna’s world and she’s allowed to paint it any way she wants.

I just wish the story would’ve concentrated on the internal struggle like it was in the beginning instead of the thriller-esque external chase stuff in the end.  And I wish Sean would’ve kept his word, even though it would’ve hurt Eva.  This is a story that begs for a second installment, really.

At any rate, I will definitely pick up the next book by this author because she got me with that romance between Sean and Eva – that was some fantastic emotional characterization and I can get over just about any plot flaws as long as I love the characters. 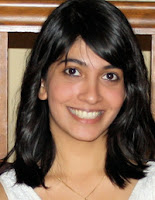 Sangu Mandanna was four years old when she was chased by an elephant and wrote her first story about it and decided that this was what she wanted to do with her life. Seventeen years later, she read Frankenstein. It sent her into a writing frenzy that became THE LOST GIRL, a novel about death and love and the tie that binds the two together. Sangu now lives in England with her husband and son. Find her online at www.sangumandanna.com