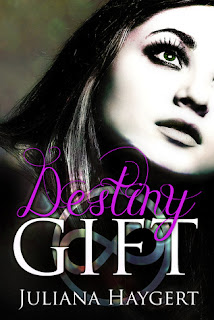 REVIEW
Destiny Gift was a definitely a ride!  This book has a bit of everything in it, it’s got a very cool fantasy/mythology plot in the form of visions, it’s got a real life dystopian New York City, it’s got a new adult vibe with the college atmosphere, and it’s got a super cool twist at the end that really got me excited!

It seriously took me up until the twist reveal to figure out what was going on, and sometimes that hurts the story for me, but in this case, it didn’t.  I was interested the entire time.  I really like Victor, much more than Micah for almost the whole book.  But at the end, I was on Micah’s side…even though he was not nice in one particular instance. (I’m sorta hoping that Nadine and him get together in the next book.  Hint**Hint**)

I liked the characterization of Nadine, she came through pretty strong, even if she was a little clueless sometimes.  And I liked the setting.  It took a while for everything to come together in Destiny Gift, but once all the puzzle pieces started to fit, it all made sense.  And when looking back, it the way it was plotted was definitely deliberate and well thought out.

I do admit that the Gods confused me a bit, I never really knew which one was which, but I catch on fast, so it wasn’t a big deal.

The romance was probably the most frustrating because even I changed sides by the time it was over and the romantic moments were not that often.  Nadine did a lot of fantasizing about Victor, and Micah made a few moves that almost got hot, so I hope there’s more of that in the next book.

This was a solid four star book.