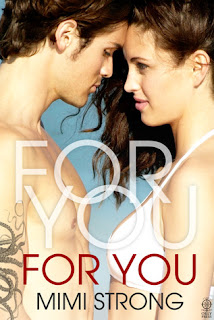 DESCRIPTION
I should have known by the tattoos that Sawyer was trouble. My mother always said to stay away from boys with ink, but she ignored her own advice. She also abandoned me and my little sister.

Life’s been hard for the two of us, on the run and on our own, but I just turned twenty-one and started working at a bar in a new city. I wear a fake wedding band and a veil of lies.

My gold ring didn’t stop Sawyer. He looked into me with his heavenly green eyes, and I nearly forgot my pretty lies. Now he wants to help me get my life together.

I should stay away, because he could blow my cover. When we get found—and I know one day we will—I want my sister to be old enough to handle the truth about our past.

I may be hanging out with Sawyer, but we’re definitely not dating. I swear, he’s not setting me on fire with every glance or casual touch. We’re just friends. I’m not thinking about him wrapping those tattooed arms around me, every second of every day.

REVIEW
Mimi Strong writes all sorts of smexy stuff in this new book—and there are plenty of romantic scenes to keep your heart-beat elevated.  And I swear, I laughed out loud a few times, namely the little peekaboo scene on the beach!

But even though it had some fun moments this was a serious book mostly about a girl who had some serious problems. Aubrey is white trash.  She knows this, no one needs to tell her, thank you, she gets it.  Her father was missing and her mother set all sorts of bad examples.

That’s what For You is about.

Aubrey, just a girl who takes control after her mother leaves her in an impossible situation. And this one decision prevents her from having a normal life and any sort of hope of having a normal relationship with a man.  She’s tried, it’s not like she didn’t try, but they all get sick of her responsibilities sooner than later.

In walks Sawyer.  He really likes Aubrey and he’s got a ton of patience, which is good because Aubrey is not an easy cookie to crack.

I thought the Aubrey/Sawyer relationship was cute and realistic.  And like I mentioned, the sex scenes were very steamy!  I enjoyed the relationship building, I enjoyed the characters, and I enjoyed the plot.  I think it was a little confusing in the beginning, but the story really pulled me in and by the time it was over, I totally loved this book.

The final climax had a nice twist to it that I wasn’t expecting and I even enjoyed the girlfriend and the drug scene, which still has me laughing right now, even though I’m not a huge fan of drugs in books.  It was wacky and yet, so cool at the same time.

This is a standalone book with a nice ending, perfect for a weekend read or, since summer is coming, a trip to the beach.  Especially if you read that beach scene while on the beach.  Comedy and steamy relationships are definitely strong suites for Mimi Strong and this one is a winner.  At the time of this review this book is #57 in the Amazon store…that’s the whole freaking Kindle Store.  Congratulations, Mimi…not too bad.  😉

Here’s what she has to say:

I’ve always had a lot of sides. Sometimes I’m vulnerable, and sometimes I go after what I want without a single doubt.

My favorite person is my husband. If I can crack him up and see his eyes crinkle at the corners, my day is made. In fact, I love making everyone around me laugh.

I’ve always enjoyed empowering stories about kick-butt women who don’t hold back and the awesome men who are smart enough to love them. Now that I’m writing these stories, I couldn’t be happier. I hope you enjoy them too!

Note: I also have a family-friendly pen name, (DALYA MOON), where you’ll find MG and YA books, from fantasy to contemporary romance.

4 Responses to “REVIEW: For You by Mimi Strong”