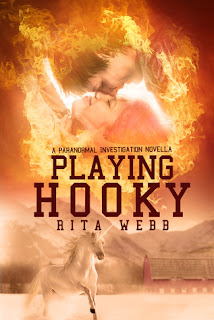 And my 21st birthday.

Just another college day full of classes and more homework than is humanly possible.

…until Jason, my best-friend-since-kindergarten, shows up to take me out for the day.

Like old times: the two of us on a wacky adventure, playing hooky from real life. With his lopsided grin and tickets to a circus full of misfits and monsters, he introduces me to a whole new world—one full of magic and mystery—and turns my reality upside down.

Except nothing goes as planned, and we end up running through the city to find a missing siren before someone brews a love potion with her blood.

Sirens and love potions, witches and elves, and Valentine kisses. Nothing will be the same for me again


REVIEW
Playing Hooky was a short, fun novella that really has some fantastical elements, a mystery, and even a little bit of love! It’s Emma’s twenty-first birthday and her best friend Jason shows up to take her out. No, not to bars so she can get drunk, to a fairy tale circus in the middle of Chugach State Park in Alaska (did I mention they live in Alaska?)

This isn’t any ordinary circus, it’s filled with unicorns, a cranky dwarf, and a missing siren. That’s the mystery, Emma makes a bet with the dwarf, who is not shy about letting her know he disapproves of humans, telling him, “I bet I can make you like me by the end of the day.”

If she wins, she gets to ride a unicorn, if she loses, she gets to muck stalls for a week. Emma figures the easiest way to befriend this dwarf is to find the missing siren, so she and Jason set off on a hunt, looking for clues in mysterious places.

Turns out, Siren’s blood is useful in a certain magical potion…I can’t say any more, that’s a spoiler.

But I will say this was a fun read. It was short and cute and had a twisty little love triangle going on. 😉 I do think Emma accepted the whole fantasy world too easily – I mean, she slipped into that world like it was just another day at the park. So I didn’t really understand that. And the end really leaves the reader wanting more, so it’s the perfect set-up for Rita Webb’s new series, Paranormal Investigations. 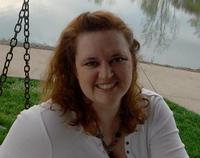 Leaving the house to go to school, I had schoolbooks spilling out of one hand, the other holding my place in a Nancy Drew novel, and bunny slippers still on my feet. My mom was a wee bit upset.

I haven’t changed much. Still always have a book (or two) in my hand or creating stories in my head, and although I don’t have any bunny slippers, I love writing in my jammies and snuggly slipper socks.

When I grow up (maybe a hundred years from now), I’d like to be a superhero, but for now, saving the day, one page at a time, suits me just fine.

With my husband TJ (my own cuddly werewolf), I home-school our three girls, who keep us busy with art, science projects, books to read, dance classes, and walks about the park.