Twenty-one year old Grayson Alexander finally breaks away from an abusive relationship and finds herself free for the first time in three years.

Determined to enjoy her new-found freedom, Grayson is intent on sticking with ‘no strings attached’ relationships—one-night stands, and steamy sex.

But she didn’t plan on Derrick.

Her attraction to the sexy man in uniform quickly turns into an unhealthy relationship. They both try to resist the pull, but neither can stay away.

When tragedy strikes, Grayson realizes it’s now or never—walk away or make it work. 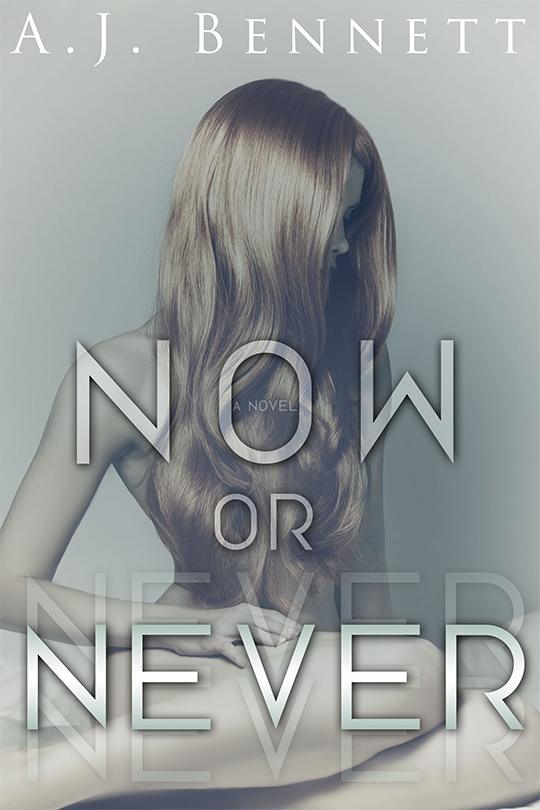 Now or Never
by AJ Bennett

Why was she acting like an idiot? He was just a guy; he probably didn’t even give her another thought after their brief eye gaze exchange.

Once she got her drink, she made her way to the cream and sugar stand to grab a napkin and hightail it out of there. Grayson turned to leave and slammed into a solid wall of muscle.
Shit.
Coffee spilled on her hand and down the front of his black T-shirt. As she held the remains of her coffee out of harms way, her chest pressed firmly against his. Horrified, she lifted her gaze.
He cupped her elbows with both hands and steadied her, his startling green eyes ringed with gold swept over her. Then he reached around her, grabbed a napkin, and wiped the hot coffee off her hand. She caught herself giving him the once over while she had his gaze elsewhere; he was so hot, his dark red hair was so fitting to his rugged facial features.
“You alright?”
Grayson mumbled something that didn’t sound like English. Her breath caught at her throat as she took in his powerful frame: his legs were slightly parted and his faded jeans clung to his muscular thighs. His T-shirt was stretched over his broad shoulders.
He smiled instantly softening his hard face. “Why don’t you come and sit down with me?”
“Um, what?”
He tilted his head towards his seat, “The cafe is full. You can share my table.”
Good grief.
All she did was make eye contact with the guy, and now he thought that gave him the right to invite her to sit down? She’d clearly been in a relationship way too long, because she had no idea how to react to his question. A part of her was curious about this man who made her heart rate speed up with just a glance, but a much bigger part of her wanted to turn and run. She just got out of one relationship; she wasn’t about to start another the moment she drove into town. Besides, she’d always heard two redheads were a disaster waiting to happen.
No thanks, she thought, I have had enough disaster in my life for at least five more years.
Although, her mother claims she’s only half redhead, the other half light blonde. So maybe it would only be half a disaster?
Snap out of it Grayson, she thought, trying to get her shit together and not look like a blabbering idiot.
“I can’t. I have to meet my family. But thanks for the offer.” Grayson tried to step by him, but he widened his stance and blocked her.
“Can I at least give you my number?”
Oh my God, Grayson thought, this guy was persistent. He was hot as hell, but come on.
“Do you hit on every girl who walks through the door?” Grayson asked with a little attitude in her voice; she couldn’t let another man gain the upper hand on her so fast.
He laughed, his eyes crinkling at the corners, and she wondered how old he was. “Not all of them.”
About the author…

A.J. Bennett lives in Nashville, TN with her husband and bulldog. She’s addicted to coffee, popcorn and books. Becoming an author has been a lifelong dream, and she’s extremely excited about her debut novel Now or Never.