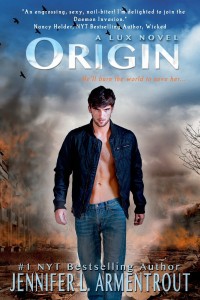 Daemon will do anything to get Katy back.
After the successful but disastrous raid on Mount Weather, he’s facing the impossible. Katy is gone. Taken. Everything becomes about finding her. Taking out anyone who stands in his way? Done. Burning down the whole world to save her? Gladly. Exposing his alien race to the world? With pleasure.All Katy can do is survive. Surrounded by enemies, the only way she can come out of this is to adapt. After all, there are sides of Daedalus that don’t seem entirely crazy, but the group’s goals are frightening and the truths they speak even more disturbing. Who are the real bad guys? Daedalus? Mankind? Or the Luxen?Together, they can face anything.  But the most dangerous foe has been there all along, and when the truths are exposed and the lies come crumbling down, which side will Daemon and Katy be standing on? And will they even be together?

Holy Alien babies everywhere, Katy has grown up and is no longer a stupid girl I want to smack. That doesn’t mean I’m willing to admit she is worthy of Daemon, but that might be selfishness on my part. I really don’t want to have to share him. With her that is, I’ll happily share him with my fellow readers.

You have read the Lux series right? If not, please do. It is my favorite series in a long time. Like, if I could only take one book series with me to read on a deserted island for the rest of my life, it would be a strong contender.

After the agonizing cliffhanger of book 3, Origin has been on my must-have list. I read it straight through in one sitting because there was no way I could put it down.

Some of the events were quite disturbing and literally churned my stomach, but Katy has grown so much and I even liked her in this one.

Daemon is as swoonworthy as ever. Just look at the cover. “He’ll burn down the world to save her.” How awesome is that?  I love the way he loves her without any reservations. There is no act that is too far over the line when it comes to what he’d do for her. Does that sometimes make him a bastard? Absolutely. And I wouldn’t have it any other way. His devotion is addictive.