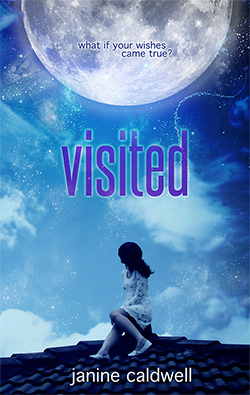 Seventeen-year-old Joanna Murphy has lost faith in her life. Vying for her mom’s attention, she’s resentful of her stepdad’s intrusion to their family. Her best friend, Tommy, has no clue she’s in love with him as he dates girl after girl without noticing how it tortures her. The final kicker, though, is God’s sick joke to make her freakishly tall when everyone knows boys prefer petite girls.

Then in a bizarre accident Joanna meets James, a breathtaking teen who appears to her after an unusual falling star sighting. Suddenly, her dream for an alien encounter becomes all too real. But when she finds her life has been made unrecognizable, she’s forced into an explosive study of the original design for her life that just may have her regretting every wish she ever made.

REVIEW
Visited is a young adult novel about learning to think of others before yourself. Joanna is dealing with a lot of changes in her life – changes she’s not necessarily on board with. Her relationship with her mother has changed a lot in the past year – especially since her mother remarried after being a single parent for a very long time. Joanna’s father died of cancer when she was younger and her mother had to struggle to raise her alone. So when Stan comes along, and then a new baby on top of that, Joanna is not feeling very generous. In fact, she’s rather bratty for a seventeen year old.

This is how she finds herself outside on her roof star-gazing – feeling sorry for herself that her family backpacking trip in Europe the next summer will need to be cancelled because her mother and Stan are expecting a new baby. Joanna is a total science nerd and I liked that about her. It wasn’t really explored much in the book since this story is mostly about relationships.

In addition to problems with her mother, her best friend, Tommy, is interested in a new girl. And this leaves Joanna feeling jealous – why doesn’t Tommy like her in that way? Joanna figures it’s because Tommy like petite girls and she’s six feet tall. 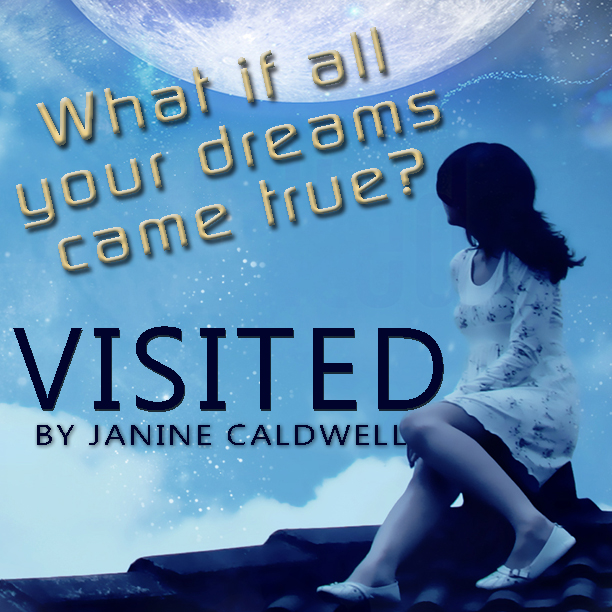 To top off her great day, she’s asked by her volley ball coach to give up the promised volleyball team captain position to another girl for reasons other than talent.

So while on the roof, Joanna sees a bright light and figures it’s a falling star – so she makes a wish. She wants all the troubles she’s experiencing, fixed.

BAM. She gets what she wants, courtesy of an alien boy named James. Soon Joanna’s wishes all come true, but all changes have consequences and she learns the hard way that not everything is as it seems.

Visited is a story about faith in one’s purpose in life, being generous, empathetic, and satisfied. Joanna learns a lot of lessons as she walks in the shoes of her new self, and while this book was a little predictable with the good and evil theme, it was sweet and I’d recommend it to any young adult that enjoys stories about aliens, family, friends, and dealing with conflicting feelings about what they want out of life as they grow up.

Janine now lives in Anthem, AZ with her husband and two sons. As a lifelong literature fanatic, she knew it was only a matter of time before she would become obsessed with writing her own work. With relatives like the Brothers Grimm and Anita Loos (Gentlemen Prefer Blondes), she figured fantasy writing had to be in her DNA.

Books published by Janine include Visited, a YA coming-of-age fantasy, Rematch and Double Fault—the first two books of The Vortex Series. The final book in this YA fantasy romance, Deuce, will be released fall 2013.

REVIEW: The Benson By Karina Halle

REVIEW: Unravel Me by Tahereh Mafi