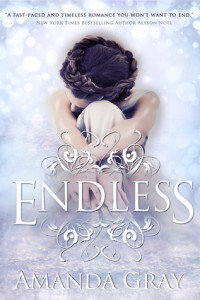 Jenny Kramer knows she isn’t normal. After all, not everybody can see the past lives of people around them.When she befriends Ben Daulton, resident new boy, the pair stumble on an old music box with instructions for “mesmerization” and discover they may have more in common than they thought.

Like a past life. Using the instructions in the music box, Ben and Jenny share a dream that transports them to Romanov Russia and leads them to believe they have been there together before. But they weren’t alone. Nikolai, the mysterious young man Jenny has been seeing in her own dreams was there, too.

When Nikolai appears next door, Jenny is forced to acknowledge that he has traveled through time and space to find her. Doing so means he has defied the laws of time, and the Order, an ominous organization tasked with keeping people in the correct time, is determined to send him back.

Amanda Gray believes in magic and fantasy and possibilities. She is a team of two bestselling authors who live only miles apart but have never met in person. They talk on the phone and are the best of friends and between them have written more than a dozen novels and novellas and have had their work appear on television.