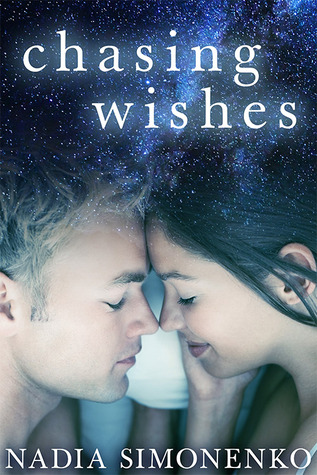 “I wish I didn’t have to go home. I wish I was someone else — someone with a future…”

For sixteen-year-old Nina Torres, it feels as if life is nothing but a dead end. Despised by her rich classmates and afraid that she’ll become just like her drug-addicted mother, Nina’s future seems to get dimmer every day.

There is one bright spot in her life though…

Sitting beside her one night, the only person in the world who cares about her makes a promise. No matter what happens — no matter how much Isaac’s wealthy family disapproves — he and his girlfriend Nina will be together forever.

Fate plays a cruel trick on Nina, though, and a visit from Child Protective Services the next morning turns Nina Torres into Irene Hartley, a woman with a future but who will never see her beloved Isaac again.

Nine years later, a blind and incredibly handsome young entrepreneur hires Irene to be his personal assistant. Terrence Radcliffe reminds her so much of Isaac that she can hardly believe her eyes, and she’s falling for him fast. Irene knows that fairy tales don’t come true, but she allows herself one last wish. She wishes that she could finally say goodbye to Isaac and let herself take a chance on Terrence.

What she doesn’t know is that Terrence is also searching for someone: a shooting star who streaked through his life nine years ago, and he won’t give up until he finds her…

Chasing Wishes is a powerful contemporary tale of lost love and wishes come true, recommended for ages 17+ due to adult content.

He raises a finger to his lips, loops his arm around mine and then guides me slowly toward the bed.

My pulse quickens in excitement, beating faster and faster with each step closer to those exquisitely comfortable sheets, and then it skips a beat entirely as Terrence whispers into my ear.

“I’d like you to try something a little different tonight,” he whispers, and I shiver in delight as his lips brush against my ear.

He sits cross-legged in the middle of the bed, and I climb up and sit beside him, first smoothing out my short black skirt as if trying to retain some modicum of decency and then giving up and sitting on my knees instead. Even though I know he can’t see me flashing him, I still feel self-conscious about it for some reason.

“I hope you’re not bored of me already,” I tease.

Now that I’m sitting on the bed with him, sitting so near to him that I can feel his breath on my skin as he leans in close, my imagination fills with all sorts of delightful ideas and desires. I can think of plenty of things that would be ‘different’ and I’m intrigued to find out what he’s thought up.

He shakes his head and smiles knowingly, and then my breath catches in my throat as he pulls a black satin eye-mask with delicate lace trim from the back pocket of his jeans.

“Put this on, please,” he tells me, and he gently presses the blindfold into my hand and closes my fingers around it.

“And then what?” I ask, tugging nervously on mask’s elastic band and running my fingers along its soft lace. I don’t know what I’d been expecting him to say, but I’m surprised at a blindfold being involved.

“Let me take charge tonight, Irene. Just trust me,” Terrence whispers mischievously. He leans in to kiss me but misses my lips and gets me on the cheek instead.

“No whips, chains, handcuffs, anything like that, right?” I ask worriedly as an inkling of panic rises inside me.

“Of course not,” he answers, raising an eyebrow incredulously. “Why does everyone think that’s sexy these days?”

“I blame Fifty Shades,” I joke, and he laughs and shakes his head.

“None of that, I promise. Just trust me, Irene.”

I let out a sigh of relief as the tension in my shoulders relaxes. Thank heaven he’s not into that sort of thing. I’m sure it’s fun for some people, but I’m not touching that stuff with a ten-foot pole.

“Trust you, huh?” I repeat, and he nods silently.

Even though I trust him—I trust him more than anyone since… well, since Isaac, really—I’m still a little nervous. I don’t know where he’s going with this once the mask goes on, but how far could he go if he’s promising not to tie me up?

He could be about to take pictures of me while I’m not expecting it. What wonderful blackmail material that’d be.

No way… he wouldn’t do something like that. My doubts have gone so far overboard that even I don’t believe them now.

“You don’t have to if you’re not comfortable,” he says, but as he reaches out to reclaim the mask, I yank it away from him and stretch the elastic over the back of my head. The soft black fabric slides down over my eyes and my pulse pounds in my head as darkness engulfs me.

“It’s on, Terrence,” I say, my voice wavering with a strange blend of excitement or trepidation.

“Thank you,” he whispers in my ear, and then he unexpectedly kisses me…

Nadia Simonenko is a scientist and author currently living in Pennsylvania with her husband, two cats and a dog. When she isn’t writing, she develops new drug compounds and dreams about someday painting her office to look like a forest.