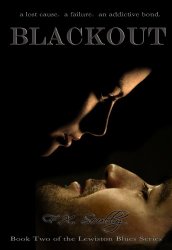 Ross Black is a failure.

He failed to protect his little brother from their past.

He failed to keep him out of trouble.

And now he’s having trouble holding onto the one girl who gets him. The one who makes him want to act like more like a man and less of an asshole. But he has a choice to make--take care of his brother or take care his heart. It's not an easy decision especially considering he's finally done something he never thought was possible: Fall in love.

Sheila Carlson is a lost cause.

She lost her sister.

She lost her dream.

And now she’s about to lose the one person she can count on. The one who makes her forget the worst parts of her life. When she learns a truth about her sister, she must decide what's more important, doing what’s right or what feels good.

Despite their issues, Sheila and Ross have something. It’s real. It’s raw. It’s probably wrong. But they’re determined to hold on for as long as they can. Especially if it means letting go of the things they’d rather forget.

Are you serious?” I ask, yanking the covers off the bed.

“What the…?” He shoots up from his prone position, squinting at me.

“It’s freezing, Ross. We have no heat, no light. Why didn’t you pay these damn bills?” I ask, tossing the papers on the bed in front of him.

“I paid them. I always pay them. “ He’s hugging himself, rubbing his hands up and down his bare arms. “What the fuck are you talking about?”

All I can do is glare in response. “Fix it,” I say. “In the meantime, I’ll be at Coco’s.” I grab a backpack from the foot of the bed and begin shoving clothes inside. “I mean really? What’s so hard about paying the bills? What’s so difficult about making sure we don’t fucking freeze to death? Is it so hard to something right, Ross? Is it? Are you that fucking dense? Why the hell am I even here? It’s like living with a five-year-old. You eat, sleep and fucking drink. The house is a mess. And now we have no power because you didn’t pay the damn bill.”

The sobs come next. I can’t even stop them from tearing through my chest. Before I know it, I’m hunched over the backpack. Hugging it, tears streaming down my face.

I feel his arms around me, but it does little comfort me. I’m cold. And miserable. I want things to go back to normal. I want my life back. I want my sister back. But I don’t say it. I don’t say anything else. I just cry and let him hold me.

I can tell he’s not talking about the heat, by the way he keeps apologizing. And I know I’m not either. I’m wrong for yelling. I know it isn’t fair. None of this is.

“Me too,” I whisper. I shake my head, because what I need to say, what I should say, I can’t. Coco’s right. Dave’s right. I should go home and face my real life. But no matter how insane and completely wrong this is, I want it. I want him. He can’t fix me. No one can. But I want him to try.

I turn my head to meet his lips, pulling him to me hard and fast. I loop my arms around his neck and position myself to straddle him, right there in the middle of the bedroom floor. The heat from his body, the way he instantly swells beneath me, makes me forget everything. How cold I am, how sad I am, how lost I am. I fist his thick dark hair, digging my nails into his scalp. Seconds later, I feel his fingers slide between my legs, stroking me through the thin fabric of my tights.

As Roscoe, rises to his feet taking me with him, I wrap my legs tightly around his waist. And as my back hits the soft mattress, I close my eyes and allow him to take me as far away from reality as possible.
New Adult Addiction’s Facebook Leah really enjoyed this book and gave it 4 stars!

F.X. Scully loves romance, but she doesn’t write your typical Happily Ever After. Because let’s face it, in the real world, it can sometimes take a lot of angst and pain before you get there. And some of us never do. But since most of us pick up books to escape the real world, her stories don’t lack hot boyfriends and sexy encounters. Neither will she leave you completely heart broken, sobbing into a tub of ice cream. Rest assured you’ll be on a roller coaster, but you’ll be glad you went along for the ride.

COVER REVEAL: Pieces of You by Cassia Leo

One Response to “SPOTLIGHT: Blackout by F.X. Scully”