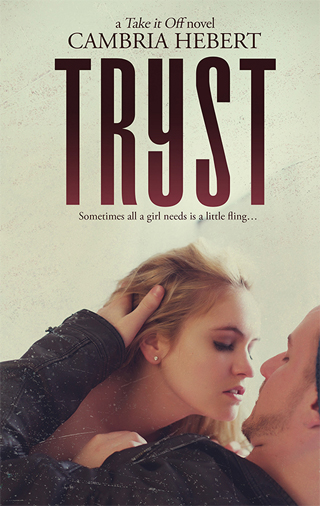 ALL Take It Off Books can be read as standalones.

Sometimes all a girl needs is a little fling…

Since she caught her cheating, loser husband in bed with his assistant, her life has been on a steady spiral—right into hell. Her car’s a junker, her job sucks, and her perfect, gorgeous sister likes to brag about her wonderful life every time they “do” lunch.

In an effort to salvage what’s left of her life and her sanity, she takes the advice of her kooky best friend and takes off to Topsail Island. A week at the beach, alone, is exactly what she needs to recharge, regroup, and relax.

Only, her alone time is about to get derailed.

Gavin Palmer’s favorite activity is walking around in his boxers and eating junk food. He and his neighbors have an understanding. They stay out of his business and he stays out of theirs. He lives at the beach, not for vacation, but for isolation. He’s had enough of people to last him a lifetime.

Gavin’s isolation is interrupted when his normally quiet neighbor starts disturbing his peace. He stomps across the sand to give the guy a piece of his mind… only it isn’t a guy.

She’d maddening, nosy, and talks too much.

But she’s hot and her bedroom eyes have him thinking maybe he’s had enough solitude. Maybe a week of company is exactly what he needs.

Maybe what they both need is a no-strings-attached tryst. 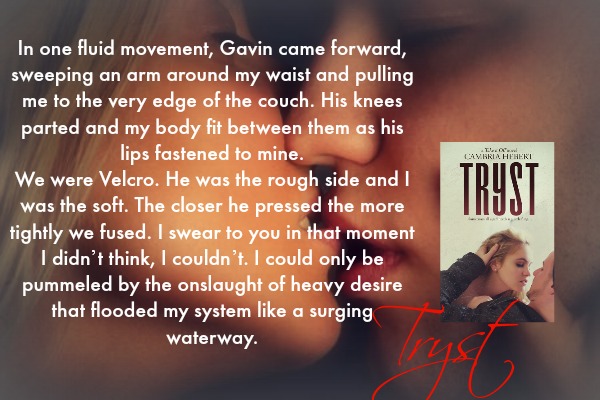 I hadn’t had sex in six months. Six months. I was practically a born-again virgin. I mean, seriously. They say when you get married, your sex life goes down the toilet, but I didn’t know who “they” were, and I thought for sure my sex life wouldn’t go downhill until I was some old lady.

I was not old.

And I kind of wanted to punch “they” in the face.

Weren’t men supposed to be a bunch of horn-dogs? In my experience, they sure were. My husband and I used to have sex all the time, but it slowly began to dwindle and then it pretty much fell off the face of the earth.
But that was going to change. I was going to do something about it. The way I saw it, I could let my insides shrivel up from lack of pleasure, or I could take the bull by the horns (or penis).

Shriveling up didn’t sound so appealing so I took the afternoon off from work (no loss there) and decided to go home and set the stage for a night of getting it on. On my way, I stopped at the store and picked up some candles, a see-through hot-pink nightie, and some edible massage oil.

I let myself into the apartment and shut the door behind me. Just as I made it to the kitchen counter, I heard a sound.

I set the bag on the counter, soundlessly, and cocked my head, listening. Another moan floated through the apartment, and I wrinkled my nose.

Had I left the TV on when I left for work this morning?

And if so, what the hell kind of daytime shows did they play these days?

I padded down the hallway, over the plush carpet, and stopped in front of my partially closed bedroom door.
The sounds of heavy breathing and the bouncing of a mattress were unmistakable.

I was really trying not to think bad thoughts.

But I mean… it smelled like sex out here. A deep, musky scent that clung to the air.

I laid my palm against the door and pushed it open, stepping slowly in the doorway.

It took me quite a few seconds to register what I was seeing. Shock rendered me motionless. All I could do was stand there and gape.

I hadn’t left the TV on this morning.

And now I knew why my husband hadn’t pleased me in the past six months.

He was too busy pleasing someone else. Someone who was not his wife.

They were so involved in the act that they didn’t even know I was there. So I watched them. This was my house. That was my bed. And frankly, a part of me thought I was dreaming.

The white combed-cotton sheets that I had shopped for diligently where all wound around the legs of the couple in the center of the king-sized bed. The pillows I lovingly picked out were all skewed from the thrusting and movement going on, and the dark-gray comforter was half falling off the bed and onto the floor.

There was a woman sitting on top of my husband. Her hair was very long and thick, the color of chestnuts, and it waved down her back wildly like they’d been at the deed for a while already. As I stared, she pushed up off him and sat up, titling her head back and letting out a very loud moan as she moved over him, grinding her body against his.

I watched as my husband reached up and grabbed her breasts, giving them a little squeeze and grunting with pleasure.

Pain sliced through my belly.

How could he do this to me? How could he tell me he loved me, ask me to spend the rest of my life with him, and then bring another woman home and into our bed?

The pain I felt might have been incapacitating, but it didn’t stay long enough. It was quickly replaced by anger. Hot, furious sparks ignited inside me and my feet began to move.

I walked farther into the room and stopped at the edge of the bed. 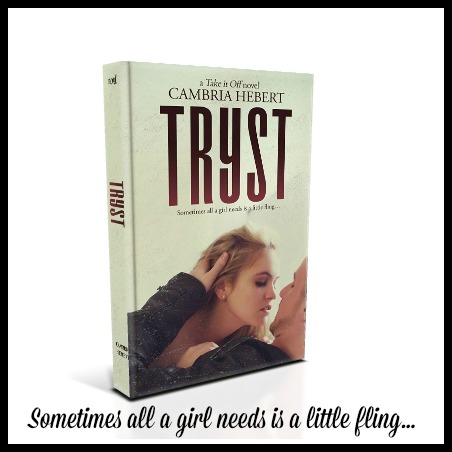 –A signed paperback of Tryst

46 Responses to “$20 GIVEAWAY and EXCERPT: Tryst by Cambria Hebert”