GIVEAWAY and EXCERPT: Come Back To Texas by K.K. Hendin | New Adult Addiction 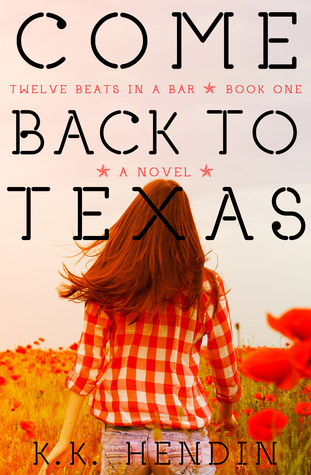 Come Back To Texas

Series: Twelve Beats In A Bar #1

Everyone thought we’d be the ones who made it through high school. The ones who’d get married and stay married forever. The example of how young love can work.

We thought so, too.

Too bad life had other plans.

It’s been three years since Hayley and Nate broke each other’s hearts. Three years, and a lot has changed. Hayley’s a freshman in Bushwick University, and the only things keeping her sane are stress baking, and her a cappella group, Twelve Beats in a Bar.

Nate’s a Marine, stationed in Afghanistan. The only thing that’s keeping him sane is the last picture he has of him and Hayley, and the hope that maybe when the hell of deployment is over, he can find her again and apologize.

One explosion will change everything.

When a bomb kills all of Nate’s unit, leaving him missing a leg and eyesight in one eye, he’s sent back home to Texas. Texas, where he loved Hayley more than he could possibly imagine ever loving anyone else.

With seemingly endless amounts of free time and needing something to distract himself, Nate starts making YouTube videos, imploring Hayley to come back to him, and come back to Texas.

Hayley’s life is wrapped around the Beats, making sure she doesn’t flunk out of biology class, and babysitting Ohio’s smallest monster, Brandon. She doesn’t want to admit it, but she misses Nate more than anything.

It’s too bad she doesn’t know just how much he misses her, too…

COME BACK TO TEXAS EXCERPT:

-camera, probably a webcam, turns on to show a 20-something year old guy sitting on a hospital bed. His face looks like he’s been through hell, his hair sticking up and a bandage covering part of his forehead and one eye. There is a faint sound of beeping, probably from various machines.

ILH: Hi, Hayley. This is kinda weird, but this is the only thing I can think of. I don’t think if I sent a letter home anyone would send it to you. Can’t blame them for it, but still. So, hi. I’m just going to babble into this webcam, lookin’ like shit and hoping that maybe you’ll see this. So, I kind of got myself into a little trouble while I was… away, which kinda explains the shitty makeup I’m wearing.

ILH: This video is depressing and fucking morbid. I know you’re not in Texas anymore, but I think you ought to come back and visit. And not just visit Austin like you’re just here for South by Southwest, but actually visit. Here’s one reason why you should come back to Texas: Noreen just told me that at the last county fair she was at, they were selling deep fried ham crackles, which I’m sure they’re not selling wherever you are. Although you probably wouldn’t actually eat them… remember when I dared you to try deep fried butter and you ate nothing but vegetables for a week after? But I can’t dare you to eat deep fried anything if you’re that far away. When Noreen finally lets me out of here, we’re going to find ourselves a county fair and we’ll clog our arteries with deep fried shit. And then figure out how to make deep fried sweet tea, because I’m sure nobody’s done that yet.

ILH *pauses* *makes a face at the screen*

ILH: I’m gonna end this now because I feel like an idiot as is. I miss you, Hayley May. Please come back to Texas.

Blitz-wide giveaway
Three winners, each one gets their choice of any two signed copies of K.K. Hendin’s books (Heart Breaths, Only The Good Die Young, Come Back To Texas) and a guarantee of an ARC of the second book in the TBIAB series when it’s available.

Open US only; ends September 1st

11 Responses to “GIVEAWAY and EXCERPT: Come Back To Texas by K.K. Hendin”