$25 GIVEAWAY and EXCERPT: For the Love of Death by Tamara Rose Blodgett | New Adult Addiction 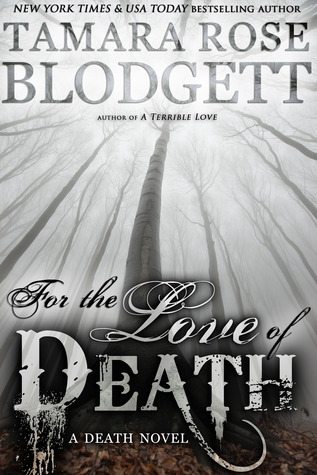 For the Love of Death

The year is 2049 and in the new dystopian order, the Randoms have risen to the top like cream. Earth faces dire consequences because of the Helix Complex and their illicit use of mass-sterilization. Many who could have children, were made into mules from the virulent Zondorae concoction of 2030.

Now middle-aged, Death’s children do their best to move forward in a world where technology and paranormal powers collide in a mix of tragedy and circumstance. Zombies have been raised for the slave trade by those Randoms in power.

Paxton Hart and Parker’s twin girls are grown and on the radar for those that understand how critical they are for the future. The tight-knit circle of friends continues to network for solutions to the depravity that has taken hold.

Can the original group right a tremendous wrong? Will the new generation of Randoms find a solution for propagation, or will their power base cannibalize those who choose harmony instead of greed?

“Hello?” Gramps voice bellows into the phone like falling gravel.

Caller ID. The most archaic thing on the planet.

Jade’s lips quirk, easily making out his side of the conversation.

“He needs another ear replacement,” she says quietly. I nod, putting a finger to my lips.

“Right. Listen, Gramps… Deegan and Paxton are MIA. Ya know where they are?”

Jade and I stopped at two kids. Felt like ten. There wasn’t enough protection in the world for our kids as Randoms. We still worry.
The open line buzzes. “Both the kids were here. Pax and I changed the oil out on the Camaro…”

“There was a little incident with Deedie.”

Jade covers her mouth with a hand, eyes wide. I wrap her forearm with my hand.

She nods, taking a shaky inhale.

“Clyde brought her. Some ruffian is trying to vamp her psychic energy right out of her.”

“Brad Thompson,” Jade says, throwing her arms down by her sides, color spreading across her cheekbones.

I’m so pissed it should be illegal. I can feel my old friend Rage come knocking. I concentrate on my breathing.

I hate some of these Randoms. My prejudice is worse than everyone’s because I was part of the problem.

Now we have abilities in the few kids who are left that aren’t catalogued. Like trees, they have all kinds of branches.

This shitty Null is also a Drainer. Our government won’t give them a name but us leftovers will.

What Thompson is doing is illegal. His father is also the head of the sanctions. He pulls every undead legislation he can.

Jade plucks my sleeve and I take my free hand and cup the back of her head. “Is she okay, Caleb?” She worries at her lip with her teeth.
Gramps says, “She’s okay, Caleb—just shook up.”

A breath whistles out of me.

I hear Gramps do a swipe of his face with his palm. Deep exhale.

Jade shakes her head. “They’re not,” she whispers at my side.

Instead I ask, “Gramps…”

“You don’t worry about him. He needs to figure out his own way about Ali, son….”

Tamara Rose Blodgett is the author of forty titles, including her NEW YORK TIMES and USA TODAY bestselling novel, A Terrible Love. Tamara writes a variety of dark fiction in the genres of fantasy, science fiction, romance and erotica. She lives in South Dakota with her family and is an ardent reader who enjoys interacting with her readers.

24 Responses to “$25 GIVEAWAY and EXCERPT: For the Love of Death by Tamara Rose Blodgett”