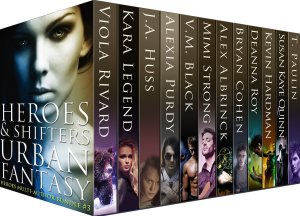 INCLUDED IN THIS 12-BOOK BUNDLE:

Lost in Winter - Viola Rivard
A woman and her young niece are stranded in the mountains, in the deadly cold of a winter night. In their fight to stay alive, they team up with a rugged stranger to trek through the woods.

Clutch - J.A. Huss
A mysterious winged man interrupts a rogue sniper on a mission to figure out secrets that have been hidden from her since birth. But does she really want to know the truth? CLUTCH is a futuristic urban fantasy / sci-fi thriller about self-discovery, risk, and love.

Bring on the Poltergeists - T. Paulin
Former delivery driver Eli Carter has a new job hunting ghosts. His boss, smooth-talking Khan Hart, assures him their first official case is an easy one. A slam dunk. A home run. But the job doesn't go according to plan. This poltergeist doesn't play by the rules.

History of Fire - Alexia Purdy
Benton is human, but he walks the line between two worlds: the mundane and the supernatural. As a rare Fire Elemental Warlock, he finds himself in trouble more often than he cares to admit.

A Curse of Wings - Kara Legend
Most fear the terrifying fehin who’ve overrun the Earth, but Bliss Daluna has learned how to deal with these demonic shifters, and turn the situation to a profit. That is, until the night all hell breaks loose, the fehin turn on her, and a mysterious stranger saves her life.

A Question of Will - Alex Albrinck
A case of mistaken identity and murder leads a man to develop Energy powers which he uses in an effort reverse the past and make the world a better place.

Taken & Pursuit - V.M. Black
Harper Bailey's adventure begins when a werewolf biker hijacks her car. This dramatic meeting takes her on the run, across state lines, into a secret lair, and into conflict with a vampire mob boss. But the greatest ride of all is the one with roguish Levi Harris, the Alpha who takes her heart captive.

Ted Saves the World - Bryan Cohen
Ted Finley was a teenage nobody. Now he’s a celebrity superhero. When murderous undead thugs attack, Ted teams with a possessed cheerleader to save his friends, his town, and… well, the world.

The Passion Cure - Deanna Roy
Jet is a Nix, an outcast enchantress with zero power. To conjure a love spell to save her family, she seduces a handsome enchanter who is willing to break the rules, and possibly, her heart.

Extraction - Kevin Hardman
Everyone needs help occasionally - even supers with amazing powers - and Jim (aka Kid Sensation) is no exception. Having previously received aid from a young psychic named Rudi, Jim feels obligated to return to the favor and rescue her from the federal facility where she’s being held.

Debt Collector Season One - Susan Kaye Quinn
In this dark and sexy urban fantasy, debt collectors—aka futuristic Grim Reapers—take your life energy and give it to someone more “worthy”… all while paying the price with black marks on their souls.

Love Singer - Mimi Strong
A struggling musician discovers she's a witch who can cast spells with her songs. Or at least that's what the sexy professor trying to seduce her says.

ONLY 99 CENTS FOR ALL TWELVE STORIES!

The heroes in these hand-selected stories are all spectacular, whether born with special abilities or created, by choice or by science lab.

The 12 tales contained within this bundle stretch the limits of imagination while blurring genre boundaries. What they all have in common is originality, and some of the most compelling voices in publishing today.

Books may be read in any order. The professionally-formatted file includes all book covers and a clickable table of contents. Please note: some stories contain mature subject matter.

One Response to “99 CENT SHIFTERS and PARANORMAL BOXED SET”