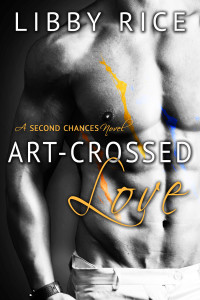 Can love be more than a four-letter word?

Lissa Blanc is a painter on a mission. She filters the world through a lens of color, line, and form and hides her ambition behind a delicate smirk that lets her critics believe life comes easy. To her, art isn’t what she sees. It’s what she feels. Few know that behind the glitz of a prodigious upbringing, she’s driven to emerge from the shadow of painful memories that insist she’ll never be a renowned talent in her own right.

Cole Rathlen is a photographer on the mend. A crippling grief has stifled his once-rising career and compromised his creative instincts. Knowing he can’t stagnate forever, he seeks a twisted absolution in the form of a woman whose paintings give life to the emotions he won’t let himself imagine, let alone feel.

When the two partner for a prestigious project that will pull them from the mountains of Colorado to the palaces of India, Lissa quickly realizes that more than diverging ideals hinder their search for success and salvation. Was Cole’s life upended by a tragic but unavoidable choice or something more sinister? While Lissa can’t delve into the mystery but not the man, Cole can’t resist a tenacious soul that refuses to leave him chained. As the truth closes in on a project finally sprouting wings, will Lissa sacrifice her chance at success to set Cole free? Or will Cole shrug the chains of lingering regrets to prove that those who love the most, love again.

Someone made a mistake in teaching you life is easy. Cole’s words had hit like well-aimed arrows, and not of the Cupid variety. At least Lissa knew which camp he fell into. The naysayers tended toward one of two options—push Lissa away or pull Lissa close. The pushers openly mocked her “illegitimate” success. The pullers beguiled her in an effort to see how much of that “luck”—or connections or money or opportunity—could rub off on them.

Cole was a clear pusher, and frankly, she liked those better. At least they were honest.

A hank of hair chose that moment to abandon the clip that couldn’t quite contain her pony tail. Ruler straight despite a healthy dedication to volumizing shampoo, her hair liked to slip from its confines and lay flat against her head in an antagonizing refusal to hold body. She imagined her looks mattered about as much to Cole as couponing did to Donald Trump, but hell, she had nothing to lose and everything to gain. After the disaster in the driveway, she could at least try to make herself presentable.

Her trek to the spare bathroom two rooms down took her past Cole’s bedroom door across the hall. His rumpled bed sat in silence. Nothing personal hinted at the room’s inhabitant. A dresser and two night stands held a clock and a box of tissues between them. No pictures or knickknacks, not even a stray piece of clothing or a random shoe littered Cole’s studied order, dimmed by heavy shades that blocked the rising sun from cheering the space.

Earthy scents of pine and sandalwood filled her nostrils. Despite his obvious efforts to disappear within the emptiness, the room bore his mark. The hard edges and sanded planks had absorbed his essence without permission.

For a chance at the GIVEAWAY…
a Rafflecopter giveaway

Before becoming a writer, Libby was first a mechanical engineer in the data acquisition industry (voltmeter anyone?). Preferring writing to technical design, Libby headed to law school and eventually practiced patent law for several enterprising years (patent application covering a voltmeter anyone?). Finally realizing that technology just wasn’t her bag, she traded the voltmeters for alpha heroes and the women who love them.

Today, Libby writes contemporary romances from the foot of the Rocky Mountains, where she lives with her husband, a bona fide rocket scientist (he stuck with the voltmeters!). When not writing, Libby loves good food, even better wine, and traveling the world in search of the next great story.