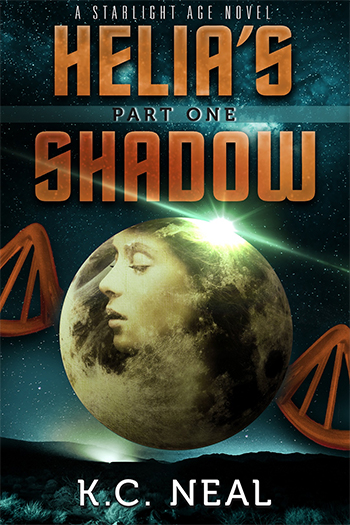 When the aliens arrived, they were hailed as the saviors of a dying Earth and dwindling human race. But the aliens didn't come to help. Now, one human girl's ingenious invention and one alien boy's awakened heart are humanity's last hope...

Nineteen years ago, aliens arrived on a barely habitable Earth with advanced technology and the promise of ensuring human survival in exchange for a place to settle. They were hailed as the saviors of humans and Earth.

Today, 16-year-old Helia wants two things in life: to step out of her over-protective mother's shadow and become an engineer, and to stop hiding her relationship with alien boy Kalo. But the world definitely isn't ready for a human-alien romance. And worse, the human-alien partnership is crumbling. Humans are arrested without explanation. Some of them are never seen again.

When the alien leader imprisons her mother on a false charge, Helia discovers the aliens never intended to help humans at all. Now, she must join forces with alien rebels. If she succeeds, humans have a chance at survival and she has a chance at love. If she fails, the dwindling human race dies out in slavery.

Helia’s Shadow was a great read if you’re into dystopian themed science fiction – and I am. Teenager Helia lives in a post-apocalyptic world. The aftermath of a brutal war that wiped out Earth and humanity as we know it. But ever since the aliens arrived, things got better. More predictable. Not luxurious in any way, even for the daughter if one of Haven’s most prominent and well-respected scientist. Water is rationed since her city is surrounded on all sides by a barren desert. Clothes are minimalistic and plain. And the aliens, while not overtly controlling the population, are much more technologically advanced.

The backstory is interesting and well thought out. The history behind the “arrival” of the aliens is compelling and original. In fact, most of this book was quite original. As the story unfolded we are fed bits and pieces of the alien presence and while that is happening, things drastically change in the city of Haven. The aliens become more totalitarian. People start to go missing. Helia is shown proof from her cousin, Gordon, that things are not what they seem.

We also meet Helia’s love interest, Kalo. I thought the backstory of Kalo and Helia was adorable. In fact, when that moment was revealed things really started to click into place for me. Even though Kalo was an alien, I think I got to know him pretty well, although this is truly Helia’s story to tell.

The action was almost non-stop and the page-turning happened as fast as the pace. I liked that. There were hints of stereotypical tropes and plot points, but just when you think – oh, I know where this is going – you don’t! That was great.

The ending is a cliffhanger but the second book is already out and I will be reading more.

I have just two small suggestions. I would’ve liked to see more foreshadowing of certain things that ended up helping Helia and Kalo as they move forward into the action in the last half of the book. And I thought the scene that explains how deep the relationship between Helia and Gordon goes, should’ve been earlier and much more in depth. I LOVED picturing that scene. I think it was adorable and could’ve been explored more thoroughly – even if it slowed things down. (which is why I’d have put it earlier in the book – but it was a clue that was meant to be hidden, so I can see the logic of where it was placed.)

I loved this book and have already purchased the second one. 4.5 stars.

In previous iterations of my professional life, I worked as a bench chemist, a lab equipment tester, a biotech researcher, and a medical writer. Strangely, this sequence has not led to my dream job: drummer in a rock band. But my current gig is pretty sweet.

I love colored pens and sticky notes, sunsets and sunrises, digging my fingers into the dirt and nurturing the things that grow in it, and learning anything and everything. I’m a scientist who studies astrology, a go-with-the-flow Type A, and an impatient practitioner of daily meditation. A big bag of contradictions, just like everyone else.