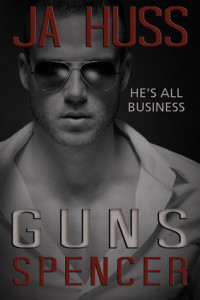 THIS IS NOT A STANDALONE BOOK. YOU MUST READ ALL THE OTHER BOOKS IN THIS SERIES FIRST.

Any one who knows me, knows I love Spencer Shrike with a passion. I claimed him as my top book boyfriend over a year and a half ago… and one year ago today, Guns: The Spencer Book released. Julie gave me an ARC on my 28th birthday and I cried. I cried a lot through this book; because her characters became real to me. I fell in love with #theteam and wanted to be a part of their world. I wasn’t ready to say good-bye.

The Rook and Ronin series and spin-offs also led to an online group of ladies, Julie’s street team, who became a family of friends throughout this series. I continue to interact with these ladies on a daily basis, many who I chit chat with on the phone, send funny texts, or simply PM. We are a close knit group of friends, all who came together because of Julie. When Guns released, it hit me how much these books, this series, all seven books, brought to my life.

So, Guns was an emotional read for me, and it didn’t disappoint. I loved everything about the Guns release. The promo graphics, the teasers, the cover! I even friended Rade, the cover model on Facebook. But most of all, it was Julie’s words that did me in. She wrote an exceptional book and even though I was so sad to see it end, it was perfect.

On the one year anniversary, I wanted to share my Goodreads review with you… and if you haven’t read this series, Guns: The Spencer Book, is the last in the series. Start with Tragic and go from there. It’s an amazing journey!

Amazing! Captivating! Intense! …Guns delivers and is a perfect shot!

Once in a while there comes a book series that just captures your attention, draws you in, and occupies your thoughts for days, weeks, and even months. It doesn’t happen often, but when it does, it is nothing short of magical. This series, all seven books about these fascinating characters and their complicated lives of lies and secrets, love and fate, have a place in my heart and mind forever. It takes a unique author to keep a strong momentum going for a long book series, and JA Huss is nothing short of perfection in delivering a satisfying, heart racing, and sexy series. This final installment completes this saga and is nothing but pure bliss for every fan of the Rook and Ronin series.

Every word, thought, and action from each previous book leads up to the events in Guns, so don’t read until you read all the other books. That’s right, stop reading if you haven’t read the others. But go and buy them, ALL. They’re THAT good. Any way, back to Guns and my main man of fiction, Mr. SHRIKE.

I have a soft spot in my heart for Spencer Shrike. I first met him in book 1, Tragic, and once he makes his appearance, I fell hard for this bad boy.

A guy comes in who catches my eye. Not because he’s hot, even though he is hot, but because from the minute he comes through the door he’s watching me.

He starts walking towards me and once the counter is out of the way, it’s hard to miss the fact that he’s a biker. He’s got the tell-tale biker boots on and they sound off a manly thud on the polished concrete floors as he approaches my booth. When he pushes up the sleeves on his white thermal I see what else he’s got. Tattoos all over. Like everywhere.

“Rook,” I offer back as I shake his hand.

Throughout the series, it’s the scenes with this biker, this intriguing bad boy, this silly goof who is smokin’ hot that caught my eye. His playful manner throughout Manic and his protectiveness in Panic solidified his place as a top book boyfriend. In Bomb, Spencer’s novella and book 6 in the series, we get to know Spencer in a more in-depth way. We understand his actions a little better and come to realize, Spencer Shrike has been holding out on us. He’s been keeping some secrets, and those secrets only made me love him more…like that was possible. Move over Kellan, Jesse, and even Christian, Spencer Shrike is my number one. 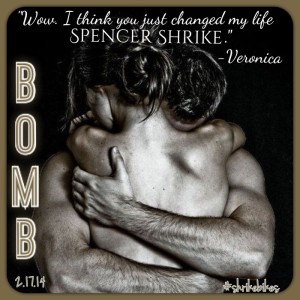 Guns picks up where Bomb left off…Rook and the boys are facing the trials from the aftermath in Panic, Ashleigh and Kate are adjusting to life in FOCO, and Spencer is continuing to distance himself from Veronica.

Everything Spencer does, he does for Veronica, only she doesn’t know it. Talk about angst and swoon worthy moments! Gunsdelivers some of the most romantic and sexy scenes I ever read. For reals, EVER! 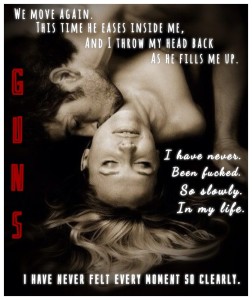 And each scene is better than the one before. How is that even possible? 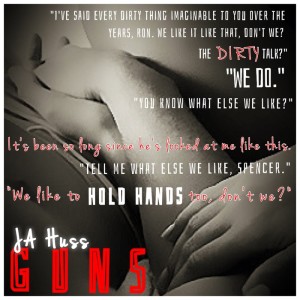 But it’s more than romance and hot sex…Guns has a lot of action. The Team is nervous, uncertain, and barely holding it together. Spencer is trying to keep Ronnie safe by not having her around, thus protecting her at the same time. Veronica wants to be part of The Team, which isn’t going to happen making her feel insecure and lonely. There are new characters in town and their timing, interference, and motives, are only adding to the stress of everyone around. No one knows who is bad, good, or indifferent! And the last 20%…in true Huss fashion, is not only filled with twists and turns, but somehow gives the reader the closure and the ‘Ah-Ha’ moment that makes this book an exceptional read. I usually can see the twist coming, but not this time. Prepare to be taken for one hell of a ride.

I was nervous and scared to read this final installment. I became attached to these characters and didn’t want to say good-bye. But, this book was pure perfection. And it gives any fan of the series the closure that’s needed and the hope for more from JA Huss. All the questions readers have been thinking about are answered, and I’m still smiling from the epilogue(s)—yes, there’s two, and both are AMAZING. Fingers are crossed that somewhere, sometime, we will get glimpses of these amazing friends again.

JA creates a fictional world that seems so realistic, I felt like I was a member of The Team the entire time- experiencing everything with each character. These characters are cemented in my brain and I love talking about them to other fans. Bravo to JA for this wonderful adventure. I’m a fan for life and look forward to more stories and interesting characters. THANK YOU JA, for all your dedication and words, this is something truly amazing. #therealmrsshrike 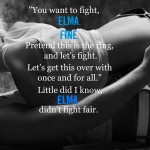 Leave a Reply to Kristi