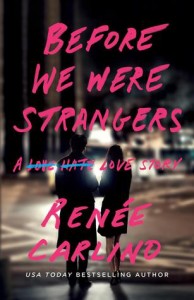 Before We Were Strangers

From the USA TODAY bestselling author of Sweet Thing and Nowhere But Here comes a love story about a Craigslist “missed connection” post that gives two people a second chance at love fifteen years after they were separated in New York City.

To the Green-eyed Lovebird:

We met fifteen years ago, almost to the day, when I moved my stuff into the NYU dorm room next to yours at Senior House.

You called us fast friends. I like to think it was more.

We lived on nothing but the excitement of finding ourselves through music (you were obsessed with Jeff Buckley), photography (I couldn’t stop taking pictures of you), hanging out in Washington Square Park, and all the weird things we did to make money. I learned more about myself that year than any other.

Yet, somehow, it all fell apart. We lost touch the summer after graduation when I went to South America to work for National Geographic. When I came back, you were gone. A part of me still wonders if I pushed you too hard after the wedding…

I didn’t see you again until a month ago. It was a Wednesday. You were rocking back on your heels, balancing on that thick yellow line that runs along the subway platform, waiting for the F train. I didn’t know it was you until it was too late, and then you were gone. Again. You said my name; I saw it on your lips. I tried to will the train to stop, just so I could say hello.

After seeing you, all of the youthful feelings and memories came flooding back to me, and now I’ve spent the better part of a month wondering what your life is like. I might be totally out of my mind, but would you like to get a drink with me and catch up on the last decade and a half?

Michelle New is back with another MUST read! Pre-order is a MUST! See Michelle’s Review below. The ARC was through the publishers via NetGallery. 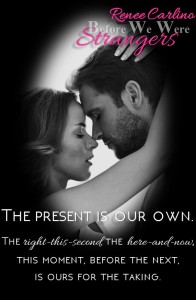 This blurb was probably one of the most intriguing and captivating blurbs I’ve stumbled across. The moment I read it, this book became an obsession. I needed to read it, I had to.

Matt has the career most photographers would kill for. Fifteen years, an esteemed position working for National Geographic and a Pulitzer Prize photo adorning his wall. But a career isn’t everything. Divorced and standing still in a city that moves at the speed of light, Matt is lost. Then one day it happens. He sees her. Grace. It has been fifteen years since he said ‘see you later’ and she’s just there. But then she’s gone. A moment where their eyes lock, recognition strikes and old feelings being to stir. Suddenly Matt’s world goes from gray to color.

When the idea of placing an ad in the Missed Connections section of Craigslist, Matt figures, what does he have to lose? Now, for anyone who has ever been bored and read through these, you know how addicting they are. I do this. Often. I can’t help myself. The one romantic post is so worth reading through all the sexual propositions and just dirty, dirty posts. So months pass and Matt hears nothing from his Green-eyed Lovebird, until someone shows her the ad and she responds.

But this love story isn’t just as simple as that. Fifteen years have passed. A love that existed was lost somewhere, somehow along the way. And before we can get to the finish, we must first go to the beginning. 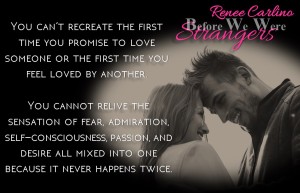 The past is revisited from the first day when Matt meets Grace, through their friendship and ultimately as they fall in love. But as often with young love, ambitions dictate decisions. You’re young, there is always more time to love but you only get one chance to live. So circumstances separate these two just as they are discovering how much their hearts belong to one another.

Watching these two fall in love was a thrilling experience. I fell head over heels with these two characters. They were so well written, complex and carried such depth. There was this whimsical feeling that made you feel just as carefree as these two souls as they had the world at their feet. A young love, rich in feeling even if they were managing to get by with just the bare essentials.

From his constant need to capture her on film to the moments he listens to her play her cello through the dorm walls; these two were perfection. Absolute perfection. And although you know that they spent the last fifteen years apart, your heart still breaks when it all falls apart. I was so lost in this story that everything outside of the words right in front of me just did not exist. My heart ached for the loss that these two must have felt. The loss of all those years, all those experiences. Everything that they could never get back.

As they reunite they talk about the lives they lived apart, reminisce on the days they spent young and in love and ultimately how they both still feel for each other now. But a lot happened in those fifteen years and the devastation as to what eventually led to the split is revealed, leaving you absolutely gutted just as your heart started to smile again.

I was all over the place while reading this book. The highs were utterly fantastic and the lows, well those stole my breath and left a trail of tears in their wake. This was my first read from Renee Carlino although she’s a name that has been on my list to read for some time. If this is the style of writing and storytelling I have to look forward to, I know it won’t be my last.

Before We Were Strangers hits all the spots in a second chance romance. This is a beloved storyline in the romance genre and this book is the perfect example to showcase why that is. A stunning love story exists inside these pages, one that became so vivid that it was as if it was leaping off the pages. I was a voyeur into Matt & Grace’s world for a few hours and I can say that it a place I’d love to visit again and again. 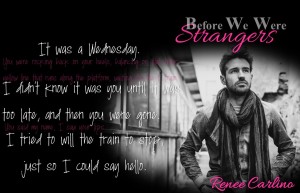 To check out more reviews by Michelle, click here to find her profile on Goodreads.

Renée Carlino is a screenwriter and bestselling author of romantic women’s novels. She lives in Southern California with her husband, two sons, and their sweet dog June. When she’s not at the beach with her boys or working on her next project, she likes to spend her time reading, going to concerts, and eating dark chocolate.