$25 and 2 Signed Paperbacks (US Only) GIVEAWAY- Dirty by A.C. Bextor | New Adult Addiction 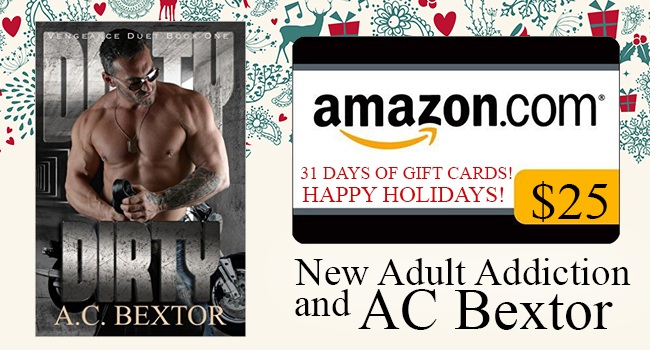 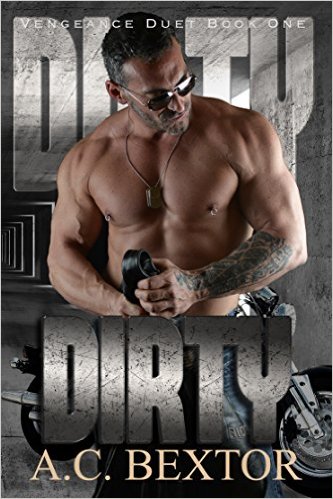 DIRTY.
A seemingly innocuous five letter word until you pull back the layers of its meaning.
Imprisoned in a small room within the walls of the Satan's Creed Motorcycle Club compound, eleven-year-old Casey Richards struggles to survive the only life she was raised to know. Her mother, a club whore, and her father, an unknown outlaw she's never met, Casey's fate is all but sealed in the eyes of the club.
Foul. Unclean. Undesirable.
Trapped in a loveless marriage, and with no children of her own, Emilyn Carsen is the only living soul willing to fight for her niece, Casey. She's all but given up on saving her until the one man she's longed to see again unexpectedly finds his way back to town and into her life.
Sordid. Vile. Unscrupulous.
Max Taylor, former-biker of a disbanded MC, has been holding onto reasons to avoid coming back to the small town he grew up in. The same ghosts that drove him away eventually force Max to find his way back. Now that he's home, he may be Casey's only chance for freedom.
Filthy. Hateful. Impure.
In order to get to Casey, Max must find a way to infiltrate the MC. Setting up a meet with Hoss, Satan's Creed's President who's known for his depravity as much as his double-crossing ways, it's made clear that forming an alliance is going to be more of a challenge than he expected. Now he must prove his loyalty to the club and in doing so, he's forced to get his hands...
DIRTY.
Due to circumstances and content, this book should not be read by those under the age of 18. 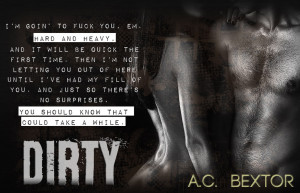 When her door opens, she jumps at the sight of the man looking down on her. It’s the same man who put her in this room so long ago, never giving her so much as a reprieve since. She didn’t know why it happened. His explanation, which she heard him tell the others, was that she needed to be put somewhere safe, yet she didn’t understand the danger to which he was referring.

Today, his suit is dark and smooth; his hair, although grey, is short, combed and neatly kept. His body is clean; she can smell the soap she longs to use as the breeze from the hallway carries it toward her. His eyes are steel-grey, with a shading hint of brown.

She dares to imagine if, had she known him from anywhere else, his face would look loving and kind. Living the life she’s led, though, has forced her to trust no one.

“Casey, sweetheart, I need your attention for a few minutes,” he tells her with a serious expression. The deep Russian accent rushes to her ears in a slur of words as he tries hard to speak his way through the English translation.
Thinking he must be mistaken, possibly talking to someone else in such a pleasant manner, she looks around the room, finding no one else. It’s then she notices those who stand behind him.

“Now.” His voice rings out as his hand reaches down to her in an offer of assistance.

Standing carefully, she feels her body growing weak and tired from nervousness. Maintaining her posture, she walks to him slowly and accepts his outstretched hand. It’s warm to the touch and inviting—everything he’s not.

Bending his body down and inching his face closer to hers, he runs his large palms up and down her small, frail arms. He asks her with faint gentleness, “How’s my beautiful princess today?”

Nodding to answer, she verbalizes nothing. She smells the stench of alcohol on his breath, having no idea the expensive taste Viktor has acquired through his years.

She doesn’t know money and power make a man hungry for the finer things in life. She wouldn’t know this because she doesn’t know him. Not in any real-life instance, anyway.

Looking at her, but not speaking to her directly, he smiles shortly. In a harsh whisper full of disgust, he closes his eyes as he speaks. “I need her cleaned up. You’re treating her like fucking garbage. She’s not that.”

“Got it,” the man behind her answers in a voice she recognizes. “I’ll have Tag run her through a shower and fetch her a change of clothes.”

Ignoring her attempts to remain steadfast in his company, she peers over Viktor’s large body and looks up to the other man responsible for putting her in here.

Hoss Lattimore stands shorter in height than most she’s used to. His long, greasy, grey hair and shaggy matching beard hide what she senses is a grotesque soul, darker than she’s ever known.

“Tell the others I want her fed more than what you’re feeding her now,” Viktor says, checking the proportions of her limbs with his hand, squeezing each briefly and growing more agitated with each pass.

Releasing her and standing straight, Viktor looks down from above. She wonders what he must be thinking. Her own appearance sickens her. Her hair is a mess of dark and uncontrollable curls, her body limp and unclean. Her teeth feel as though they’re each in dire need of attention.

Viktor smiles, moves a finger and places it gently on her nose. He leaves it there and continues to look at her while talking to Hoss. “She’ll be worth nothing if she isn’t kept well. Have Anna mother her, show her the proper way to greet a man. Her own mother’s a worthless whore. I want Tag kept away from her. Do you understand?”

Unsure whether to breathe a sigh of relief at his direction or worry about what’s coming next, Casey looks to the floor beneath her.

Viktor doesn’t allow this for long. Using his finger to lift her chin, he aims her head toward him and smiles softly. “First lesson, my love: never look away. Second lesson: always do as you’re told.”

Nodding again, this time she vocalizes her understanding. “Yes, sir.”
a Rafflecopter giveaway

AC Bextor lives in a small town in the Midwest. When she’s not writing she can be found reading or watching her favorite sports teams. She enjoys spending time outside fishing, swimming, or camping. 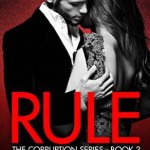