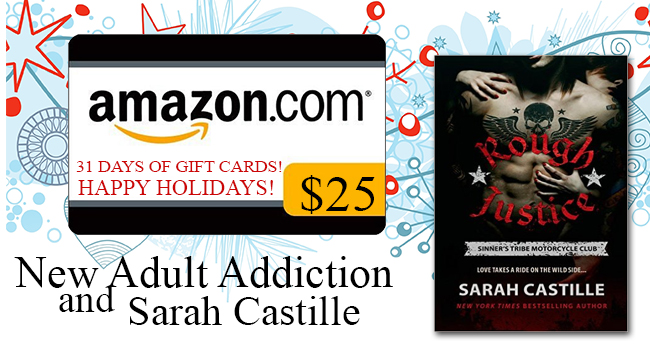 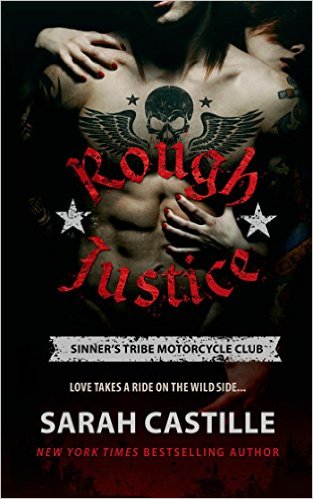 IT TAKES A GOOD, STRONG WOMAN

Raised in a motorcycle gang, tough, beautiful Arianne Wilder has always dreamed of a normal life. But no sooner does she escape her father’s domineering grasp than she wakes up to find herself in a rival gang’s clubhouse—at the mercy of the dangerously sexy Jagger Knight.

TO TAME A MAN WHO’S HELL ON WHEELS.

The alpha leader of the notorious Sinner’s Tribe, Jagger Knight is all muscle, all biker, and all man. But somewhere inside this hard, tattooed outlaw, Arianne senses a kindred spirit—and she can’t ignore their tempestuous attraction. Can she beat him at his own game in a revved-up blaze of glory? Or will their passion spark a war that’s the end of the road for them both?

Rough Justice is the first book in a full-length, standalone series by New York Times bestselling author, Sarah Castille, featuring red-hot, hard-riding bikers and the women who can’t help but love them 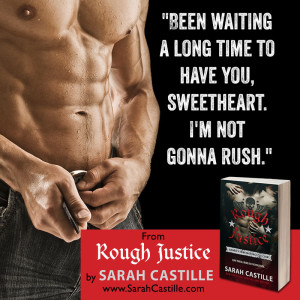 “You don’t think I can fix your bike?” Arianne raised a quizzical brow.
“Pretty hard to do in the dark without tools.” He patted the leather pillion seat behind him.
“Then why did you stop here?”

Jagger gritted his teeth. For the first time, he wished he were more adept at lying, but military families prided themselves on bringing up children steeped in honor, discipline, loyalty and honesty, and his family was military three generations back. Evasion, on the other hand, was part and parcel of being an outlaw. “On the bike, Arianne.”

If he were a man with even an ounce less self-control, her amused smile would have been enough to have him twining that shimmering hair around his fist and hauling her to his lips for a sweet taste of her honey. And when she brushed a kiss over his cheek before settling on the seat behind him, he almost did.

“Well, now that our romantic rendezvous in the moonlight is over, let’s get going.” She settled herself behind him, wrapping her arms around his body. “I have a bike to fix.” She pressed herself against his back and whispered her lips over his ear. “Or not.”
His body reacted as if he’d been shot with adrenaline, his groin tightening, heart thudding in his chest, desire thickening his veins. To hell with the slow sensuous seduction. He wanted her. Now. And damned if he would wait another minute to have her after that invitation.
“Off the bike.”

Arianne sighed as she slid to the ground. “Seriously, Jagger. This is getting. . .”
Her voice trailed off when he turned and lifted her, helping her straddle the seat in front him, her hips only inches away from his cock, rock hard and pressing painfully against his fly.
Just a taste.

Deepening the kiss, he cupped her breast and let the soft weight settle in his palm. He kneaded the soft flesh and she moaned, a soft guttural sound that made his cock throb.
“So fucking sexy.” He broke away and feathered kisses along her jaw and down the slender column of her neck, delighted when her head dropped to the side to give him better access. She tasted of sunshine and flowers, perfumed with sex and sin.

“You ever fuck on your bike, Jagger?” The throaty rasp of her voice slid through his body like a silken ribbon, tying itself around his cock until he had to grit his teeth against the pain. Wary of the soft press of her hips against his thighs and the potential for a touch that might set him off, he cupped the back of her head with his hand, holding her still. Then he kissed and licked with abandon, as images of her naked and straddling his lap assailed his mind.

Get a fucking grip. He was goddamn MC president, not a horny teenager at a drive-through. And yet he couldn’t remember ever being so hard or wanting a woman as much as he wanted Arianne right now.
“When I fuck you the first time, sweetheart,” he murmured, nuzzling her neck, “we’re gonna need a bed, ’cause I want to take it slow. So slow that by the time I slide my cock into your pussy, there won’t be an inch of your body I haven’t claimed. And when I make you come, you’ll be so fucking wet and ready, you’re gonna scream for me until you can’t scream anymore.” He pulled away and fisted her hair, testing her response to his dominance. “I want to hear that scream, Arianne.”
She groaned and her head fell back, exposing the delectable hollow at the base of her throat. Jagger kissed her lightly, enjoying the rapid flutter of her pulse against his lips. Aroused. Like him. 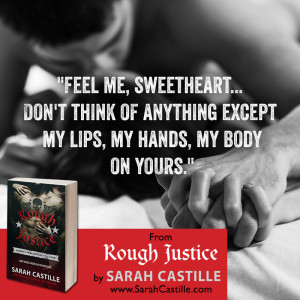 “Tease.”
“Fact,” he said, although he had serious doubts he’d be able to hold out long enough to do what he’d said.

“What about the second time?” She licked her lips, not submitting to his hold, but not fighting it either. How far would she let him go?
“The second time, you’ll be on your knees and I’m gonna watch those sweet lips slide up and down my cock.”

She slid her hands up his chest, twining them around his neck. “You’ve got a dirty mouth, Mr. President.”
“Dirty mouth for a dirty girl.”
Arianne laughed. “You think I’m a dirty girl?”

He traced his finger down her throat to the vee of her shirt, then tugged the garment, exposing the crescent of her breast. “You’re here with me. Wantin’ to fuck on my bike. Makes you a dirty girl.”