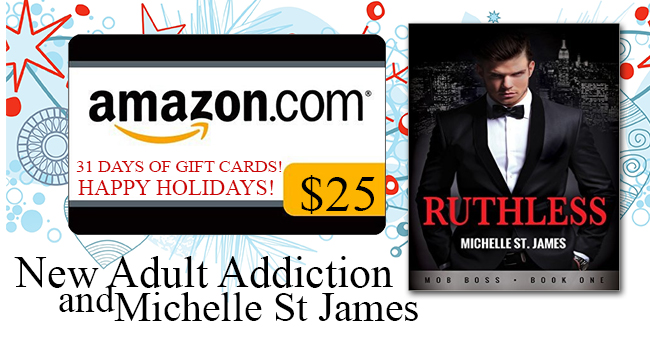 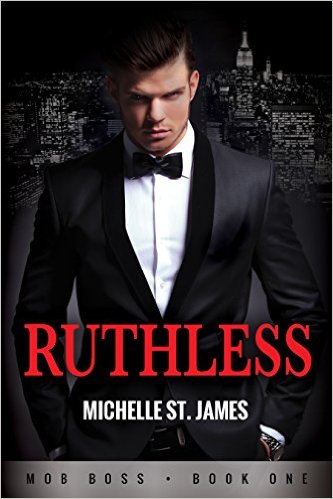 A dangerous criminal. His enemy’s daughter. Can love conquer revenge?

Two years out of college, Angelica Bondesan spends her time working as a barista, keeping in touch with her prodigal brother, and trying to figure out how to bridge the gap with her father, a wealthy real estate developer.

But all of that changes the night she’s kidnapped. Thrown into a windowless room, Angelica is positive there’s been some kind of mistake — until she meets Nico Vitale.

Gorgeous and frightening, Nico became the boss of New York City’s Vitale crime family after the execution style murder of his parents two years earlier. Since then he’s turned the old-school mob into a sleek, modern army of ruthless men who understand that physical violence — while always an option — isn’t the only way to get what you want.

Now Angel is forced to face the truth;

Her father is not the man she believed him to be.

She is falling in love with Nico Vitale.

This is not your mother’s mob. 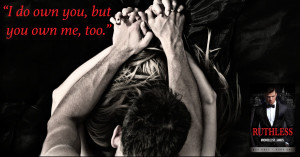 She was almost elated. Now at least, something would happen. The knowledge that she probably wouldn’t like it was responsible for the knot in her stomach, and she spent the next couple of hours staring at the door, feeling slightly nauseous.

She forced herself to remain seated when she heard a key in the lock on the other side of the door. She wasn’t going to give the asshole — whoever he or she was — the satisfaction of knowing she was scared. But all of her big plans went out the window the moment the man swept into the room.

He was tall and powerfully built, his broad shoulders straining at the rich fabric of his designer suit. Everything about him was leonine, from the thick, dark hair combed back from his face, to the pronounced cheekbones over the strong set of his jaw. He moved quickly and gracefully toward her, not a shred of indecision in his gait.

But it was his eyes that made her stand, that forced her back against the wall.

They might have been brown, but the flecks of amber glowing from their depths made them look almost green. She had a flash of the black panthers she had loved at the zoo when she was little. Their unflinching gaze had been predatory, the raw power in their prowl both frightening and awe-inspiring. They had drawn her like a magnet.

Now, she had that same sensation. Like she was helpless in the face of him, forced to wait until he devoured her. She felt like she couldn’t breathe. Like this man, whoever he was, had sucked all the oxygen out of the room with his mere presence.

He didn’t stop until he was right in front of her, and her breath came fast and heavy as he stared her down, eyes locked on hers.

Finally, he spoke. “Is there a problem?”
His voice was deep and sure, with the diction she recognized from her wealthy classmates at boarding school. The question threw her for a loop (who was she kidding? he threw her for a loop), and it took few seconds to summon the anger that had been her companion during her hunger strike.

“You bet your ass there is.” She pushed her chin into the air. “Your men drugged me, kidnapped me, and kept me prisoner. I’d say that’s a big fucking problem.”
“My men didn’t do any of that,” he said.
She didn’t know what she had expected, but it wasn’t that. “Then who did?”

“I did.” He leaned down, his face mere inches from hers, and she caught a whiff of something musky and elemental laced with soap. She had a sudden flash of herself naked, wrapped in his suit jacket, infused with his scent. She was trying to shake the image from her mind when he continued. “And that’s because nothing happens here without my approval. Nothing. Do you understand?”

He held her captive with his eyes, and she hoped he couldn’t see the rapid rise and fall of her chest. Or that at least he would think it was fear. Because now that they were face to face, fear was a lot more palatable than the lust fighting for position in her body. And there was no denying the desire coursing through her veins. She felt it from the surface of her skin, only inches from the crisp wool of his suit, to the longing that beat like a drum at the center of her body.
She wanted to slap herself for nodding. 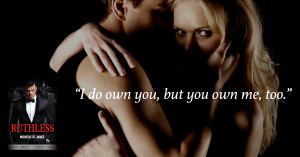 “Good,” he continued. “Because while you’re here, you will abide by the same rules as everyone else. Which means you will obey my every order without question. That includes eating. And if you don’t, I might have to bring your brother in to keep you company.”

His mention of David was like a slap to her face. “David…”
“Will be fine,” he finished. “And so will you, as long as you do as you’re told.”
“What’s the point of eating if you’re going to kill me anyway?” she finally asked.
He didn’t flinch. “As long as you’re quiet and cooperative, you’ll be set free as soon as I get what I want.”

So she’d been right. Ransom. “Why should I trust anything you say?”
He stood a little straighter, pulling back enough that she felt like she could breathe again. “Whether you trust me or not is of no concern to me, Angelica.” She was still recovering from his use of her name when he turned around and headed for the door. “But you do have my word.”
She was reeling from her contact with him, questions swarming her mind. He was almost out the door by the time she fought through the noise in her brain to find the one thing she was desperate to know.
“Who are you?”

He stopped walking but didn’t turn around. “I’m Nico Vitale,” he said. “And I can either be your greatest ally or your worst enemy. It’s up to you.”

Michelle St. James aka Michelle Zink is the author of seven published books and six novellas. Her first series, Prophecy of the Sisters (YA), was one of Booklist’s Top Ten Debut novels. Her work has also been an Indie Next selection and has appeared on prestigious lists such as the Lonestar List, New York Public Library’s Stuff for the Teen Age, and Chicago Public Library’s Best of the Best. Her character, Alice, won the Teen Read Awards for Best Villain against Harry Potter’s Lord Voldemort. She lives in New York with too many teenagers and too many cats.