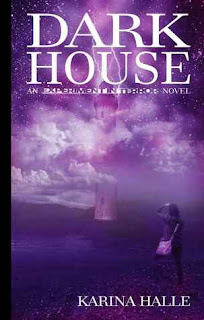 Darkhouse (Experiment in Terror, #1) by Karina Halle was the funnest thing I’ve read in a very long time.  When considering what rating to give this book was tempted to give a four or maybe a four and a half just because there’s nothing real deep about the book as far as the underlying message goes.  It’s just plain fun.
And then I started thinking I really need to come up with a scale so I can judge all books equally.  I mean, is plot the most important thing?  Character development?  Setting?  Theme?
And I’ve come to the conclusion that it must have a combination of all these things, but that each individual book can have these requirements in different ratios and still be a five rating.
Whew…with that said…Darkhouse is a five star book and I’ll tell you why it got the five stars and Fall From Grace did not.
Darkhouse has a great female protagonist who is flawed and has a narrative running through her head that pretty much reflects my own!  Perry is so cool I barely have the words to describe her.  When I wasn’t catching myself smiling for pages on end I was catching myself laughing out loud.  Perry is hilarious and I relate to her.
Halle gets hands-down, five stars for Perry.
Dex is cool too, for one, he’s got a life and a girlfriend, and all sorts of stuff besides Perry going on in his life.
I can’t rate Dex because we didn’t get to know him that well in this book, but I suspect I’ll know him better after I finish the second book.
Ok, plot.  It did start a little slow but I get it.  Halle needed to set it all up, what with the sister’s blog and the office, and the weirdness of her life.  I’m OK with that.  From the first plot point on, we have a standard story structure, which works.  I love the standard story structure, so five stars for plot.
Theme was lacking, but there’s room for that in future books, so no points knocked off for that.
I loved the setting and I think Halle did a great job at making me think I was on the Oregon coast.
But again, beyond all that, this book was fun!  It made me laugh, it actually did scare me, and it made me want more.
Since this book has been out for a while I will not get into the plot and all that, you can get that from other reviews.  I’m only interested in letting people know why I feel a certain way about a story, not giving a blow-by-blow of what happens.  This is a ghost-hunter story and describes how the team of Perry and Dex come together to have their own internet show on ghost hunting.  You don’t have to like ghosts for this book to be a hit for you because like I said, Perry as a character, is exceptionally fun.  And if you’re a horror-hater, I think you might enjoy it, despite yourself.
So there you go, my first five star review on New Adult Addiction goes to Darkhouse (Experiment in Terror, #1) by Karina Halle. 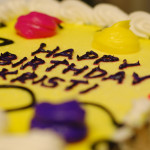