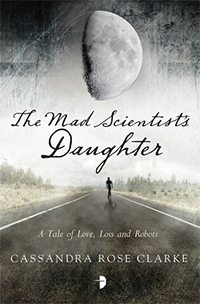 There’s never been anyone – or anything – quite like Finn. He looks, and acts human, though he has no desire to be. He was programmed to assist his owners, and performs his duties to perfection. A billion-dollar construct, his primary task is to tutor Cat.

When the government grants rights to the ever-increasing robot population, however, Finn struggles to find his place in the world.

REVIEW:
I was blown away – BLOWN away by this story.  I loved it.  I used to read nothing but literary fiction, oh, maybe ten-fifteen years ago.  But then I read The Time Traveler’s Wife and I was so put off by the bullshit science, I switched to genre fiction only.
Specifically genre science fiction.
At least those writers, for the most part, cared if their premise was actually possible.  Sorry, I’m a science nerd, this counts if you’re going to write science fiction.
The Mad Scientist’s Daughter book is not really science fiction, but it is a pure literary delight.  I’ve read the other reviews and those that couldn’t connect with Cat, well I simply don’t understand it.  I felt her loneliness, her ice queen personality so completely I had tears in my eyes when she finally realized what her life had become and what she had done.  And when Finn dropped his bomb on her, I sat up in disbelief!  DISBELIEF!  How could he do that?
This book had just the right amount of science and explanation.  Something The Time Traveler’s Wife totally messed up in my opinion.  (TTTW) was pretty good until the author tried to explain her book scientifically and then it was just stupid.  The whole thing, wiped away for me because it was so freaking stupid.
The Mad Scientist’s Daughter is a love story with the caveat that the male love interest is not human.  Hell, not even living by current scientific standards.  So, like I said, this story is not science fiction in my opinion; I’ll call it literary speculative fiction.  I just made that up, so you know; take from that what you will.  I still loved it, no matter what genre it is.  The writing was beautiful, the characterization exceptional, and the theme lovely and touching.
I to would’ve liked to see this story from Finn’s POV, so maybe the author will write that story next?  Hmm??

I almost read this book straight through but my freaking battery died about 75% in.  Then I almost had a panic attack when my Kindle reset itself when I was at 90% and it took forever for this book (An ARC provided by Net Galley, therefore revocable at any time, I presume) to show back up.  I was actually writing a letter to the publisher in my head, imagining the words I might use to make them give me the book back, in those few seconds I had to wait for it to appear on my list.  Whew.  Thank god it did not come to that.

Also, as a homeschool mom for more than thirteen years, I loved that Cat was educated, almost completely, by Finn, at home.  Wow – it was just so great.  And I also loved the fact that the ONLY person who brought up the H-Word (homeschool) in the whole book was a teacher at the Montessori school.  How real-world applicable is that?  (It’s an inside joke maybe?  That only us homeschool parents can appreciate?)
The only thing I would change is to add more to the ending – it was slightly abrupt.  But I’m not complaining and if this author wants to stop by New Adult Addiction for a tour stop, she is more than welcome any time.
I received this ARC as a review copy from Net Galley in exchange for an honest review.
Author Website ~ Twitter ~ Goodreads 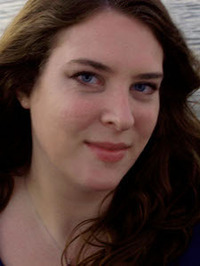 Cassandra Rose Clarke is a speculative fiction writer living amongst the beige stucco and overgrown pecan trees of Houston, Texas. She graduated in 2006 from The University of St. Thomas with a bachelor’s degree in English, and in 2008 she completed her master’s degree in creative writing at The University of Texas at Austin. Both of these degrees have served her surprisingly well.

During the summer of 2010, she attended the Clarion West Writers Workshop in Seattle, where she enjoyed sixty-degree summer days. Having been born and raised in Texas, this was something of a big deal. She was also a recipient of the 2010 Susan C. Petrey Clarion Scholarship Fund.