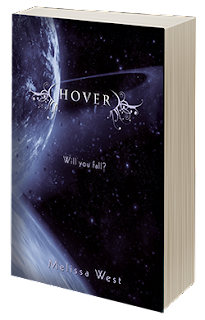 On Earth, seventeen-year-old Ari Alexander was taught to never peek, but if she hopes to survive life on her new planet, Loge, her eyes must never shut. Because Zeus will do anything to save the Ancients from their dying planet, and he has a plan.

Thousands of humans crossed over to Loge after a poisonous neurotoxin released into Earth’s atmosphere, nearly killing them. They sought refuge in hopes of finding a new life, but what they became were slaves, built to wage war against their home planet. That is, unless Ari and Jackson can stop them. But on Loge, nothing is as it seems…and no one can be trusted.

The Taking Series intrigued me from the beginning, mostly because of the so very, very beautiful cover, but also because I’m a total SF lover.  I don’t normally read a lot of young adult books, but I make the most exceptions for SF because almost all the really good SF I’ve read in the last year has been YA. 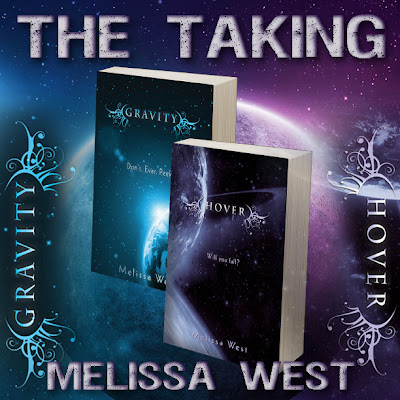 I liked Ari immediately because she’s in a near-future world, the story is not real dark, she’s a kick ass soldier, and she’s nice.  She’s been raised to be a nice girl and I like that in young adult books.  She has a lot of respect for her family and genuinely asks herself What would my dad think of this? He’s her major influence as a young person because he’s been training her to take over his command since she was just a little girl and the man pulls no punches.  She’s been raised to be a leader her whole life.

In Gravity Ari come into contact with a kid named Jackson.  And Jackson gives Ari a run for her money in almost every way.  He’s strong, he’s talented in training, and he’s hot!

She has a hard time coming to terms with all these things, especially when she realizes he’s been keeping things from her.  In the first book Ari was very black and white with her expectations and emotions since it was the beginning of her character arc, which sorta bothered me. 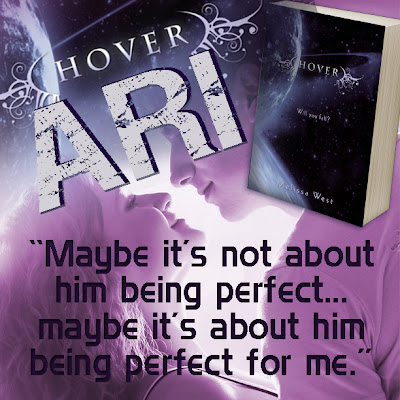 But in Hover, Ari is trying to come to terms with this limiting part of her personality.  She sees Jackson deep down for the first time. On Earth, he was just another kid to her—a talented one and a good-looking one, and someone who she trusted but probably shouldn’t have. But now that she’s on Loge she gets to see Jackson the way he really is.

Some of what she finds out about Jackson is admirable—he too, is a born leader.  And he’s her commander in her training sessions.  He’s also vulnerable and this is a Jackson she’s never seen before.

One of the things I really liked about Gravity was the Taking part, where the aliens would force the humans on Earth to wear these blindfold masks each night so they could absorb human antibodies necessary for survival on Earth.  This puts the humans in a totally one hundred percent vulnerable situation and it was sorta shocking to me.

So it’s nice that Ari gets to see this side of Jackson after he had such access to her over the years on Earth.  While Gravity dealt with Ari trying to prevent a war between the species, Hover is all about taking out the Ancient’s leader, Zeus and saving the Logians from their dying planet by getting them back to Earth.

And as a subplot, the budding relationship with Jackson was fantastic.  Ari really matures emotionally in this book.  She realizes that perfection is not attainable and this is a big deal for her because her father was all about perfection.  She comes to understand that compromise is inevitable. No one side will win, no one side will get everything they want.  There is no such thing as perfection.

“Don’t apologize. You could never forgive me or talk to me again, and it would change nothing for me. Still, my first thought every day for the rest of my life… will be you.”
~ Jackson

I loved this continuation of the series. It was action packed, the world building was a lot better than in the first book, and the romance really moved along nicely.  They even had some naked time!

But it was cute and age appropriate. 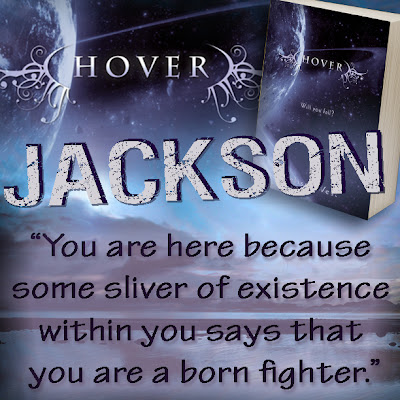 The two main plots also developed nicely and Melissa West loves the cliffhanger.  I didn’t mind the first one at all, it was very well done.  This one I saw coming, I sorta felt it, but it’s a big one.  I’m not anti-cliffhanger and depending on the book and how the plot resolves, I can deal or they can really bother me.

In Hover, one plot is resolved while the other is not. So we are definitely left wondering what will happen next. Part of the cliffhanger ending is really just Book Three set-up and part of it is unresolved conflict. But I will say I wasn’t all that bothered by it in this case.  I mean what fun would Book Three be if that conflict was resolved?  😉

The Taking a great YA SF series.  Melissa West does a good job with the science part, something I really look for.  Her concept about the human antibodies was very cool and even though I saw a lot of it coming, I’m a scientist, so I don’t count.  For the age group this is written for, I think the science is well thought out and presented at just the right level so they don’t get lost in the details, yet they can probably learn something from it. I will definitely be picking up the third book to see how Ari and Jackson bring everything full circle. 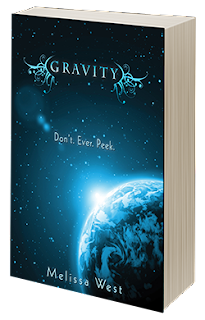 In the future, only one rule will matter:

Seventeen-year-old Ari Alexander just broke that rule and saw the last person she expected hovering above her bed — arrogant Jackson Locke, the most popular boy in her school. She expects instant execution or some kind of freak alien punishment, but instead, Jackson issues a challenge: help him, or everyone on Earth will die.

Ari knows she should report him, but everything about Jackson makes her question what she’s been taught about his kind. And against her instincts, she’s falling for him. But Ari isn’t just any girl, and Jackson wants more than her attention. She’s a military legacy who’s been trained by her father and exposed to war strategies and societal information no one can know — especially an alien spy, like Jackson. Giving Jackson the information he needs will betray her father and her country, but keeping silent will start a war.

Melissa lives in a tiny suburb of Atlanta, GA with her husband and daughter. She pretends to like yoga, actually likes shoes, and could not live without coffee. Her writing heroes include greats like Jane Austen and Madeleine L’Engle.

She holds a B.A. in Communication Studies and an M.S. in Graphic Communication, both from Clemson University. Yeah, her blood runs orange.

REVIEW: Daughter of Smoke and Bone by Laini Taylor

One Response to “RELEASE DAY REVIEW: Hover by Melissa West”