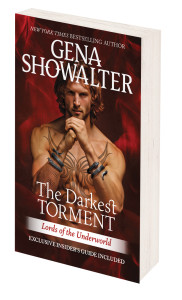 Driven to his death by the demon of Distrust, Baden spent centuries in purgatory. Now he's back, but at what cost? Bound to the king of the underworld, an even darker force, he's unable to withstand the touch of another…and he's quickly devolving into a heartless assassin with an uncontrollable temper. Things only get worse when a mission goes awry and he finds himself saddled with a bride—just not his own.

Famed dog trainer Katarina Joelle is forced to marry a monster to protect her loved ones. When she's taken hostage by the ruthless, beautiful Baden immediately after the ceremony, she's plunged into a war between two evils—with a protector more dangerous than the monsters he hunts. They are meant to be enemies, but neither can resist the passion burning between them…and all too soon the biggest threat is to her heart.

But as Baden slips deeper into the abyss, she'll have to teach him to love…or lose him forever. 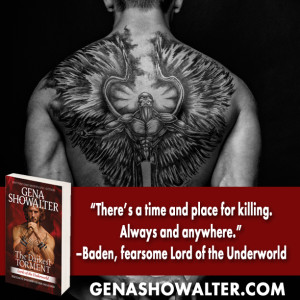 Confession of a book junkie… After I read Twilight in 2008, I became OBSESSED with all things paranormal. Starting in 2009, I was the lady who was at my local Barnes and Noble every Tuesday, waiting for the newest paperback release. I read everything PNR back then…everything. I read the whatever the paranormal goddesses wrote; including all the BDB novels and spinoffs—Zsadist lover forever!, the Sookies, Immortals After Dark, Midnight Breed series, Night Huntress (love me some Bones), Demonica series—sex demons—yes, please, the list goes on and on. One of my favorite PNR series, is the Lords. The Lords of the Underworld world captivated my life for years! Book club topics were filled with the love stories of these demon carrying studs from Budapest. Talk about an alpha hunk with a heart of mush…gah, I love them all! I took a break from paranormal romance a couple years ago, and getting the chance to review the latest and greatest Lords book was a perfect way to get my toes wet again in this amazing genre.

I forgot how much I love paranormal. Good paranormal stories I should clarify. What I love most in reading is the escape a story takes me to. That can be hard in fantasy, paranormal stories, to create a realistic fantasy world filled with beasts, mythical creatures and monsters. Gena Showalter’s stories never disappointed. From page one, I was entranced and found myself immersed in this fantastical world that puts humans and immortals together.

I do admit, my own fault, I haven’t read all the books in this series. The last trip I made to the Underworld world was a handful of years ago when Paris met Sienna. It took me two chapters to get my bearings, but even with my absence, I understood the plot and fell in love with Baden. He reminded me a lot of Maddox, my first love in this series. He’s a good guy, stuck in a horrible situation—carrying Destruction with him, inside him. But through it all, the reader grasps his goodness, his battle to do what’s right when all he wants to do is give into his inner beast. Kudos to Gena for making him look like Jamie Fraser. Swoon. What a visual!

Katarina is a strong heroine from the get go. At times, I thought she was almost too strong and opinionated. But she is perfect for Baden. I loved where her story line went and so pleased at the ending!

If you like a story like Beauty and the Beast, you’ll love this installment in the amazing Lords of the Underworld series. I love the hints for what’s to come. Poor William and his dilemma with Gilly, who I am a bit heartbroken for, what will happen to those two? And Cam… geez, she really deserves a happy ending. So until the next book releases, I’m going back to the series and picking up where I left off. This was the perfect reunion for me to get antiquated with these characters who I love so much again.

Gena’s writing doesn’t disappoint. A true storyteller who weaves words into an all day escape from reality for all romantic readers. Gah, I loved this book! I want more. 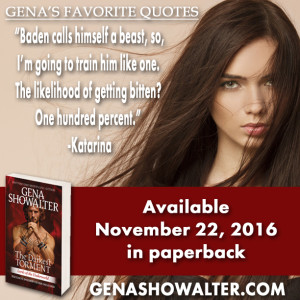 For a special excerpt, read below. Hope you one-click this baby! Paperback is out November 22.

He took a step to the side, intending to move around her. Oh, no. She flattened her hands on his shoulders, keeping him in place.

He snapped his teeth at her in a show of dominance. “You think you want to know my problem. You’re wrong.”

Her tone dry, she said, “I’m so glad you know my mind better than I do.”

“Very well. I need sex.” He threw the words at her as if they were weapons. “Badly.”

Heart pounding, she jerked her hands away from him. “Sex…from me?”

Only. Amazing how one little word could send pleasure soaring through her, warming her. “You told me never to touch you.” Which she’d just done, she realized. My bad.

“I’ve changed my mind.” His gaze dropped, lingered on her lips.

Burning her… “But you and I…we’re a different species.” As if that mattered to her body. Gimme!

He took a step closer, invading her personal space.  “We’ll fit, I promise you.”

Tristo hrmenych! The raspy quality of his voice, all smoke and gravel…she shivered with longing. Must resist his allure.

But…but…why? Before she’d committed to Peter, she’d dated around, had made out in movie theaters, cars and on couches. She’d liked kissing and touching and “riding the belt buckle,” as her friends had called it. Then, after committing to Peter, she’d gifted him with her virginity. At first, he hadn’t known what to do with her—he’d been just as inexperienced—and she’d left each encounter disappointed. When finally she’d gathered the courage to tell him what she wanted, he’d satisfied her well.

She missed sex. But connection…intimacy…she thought she missed those more.

The dogs barked, jolting her from her thoughts. They’d cleaned their food bowls, and now wanted to play. She clasped Baden’s hand to lead him out of the kennel. He jerked away, severing contact.

One action. Tons of hurt.

“I’m allowed to touch you and you want to have sex with me, but you’re still disgusted by me.” She stomped outside the kennel, done with him. “Well, I’m leaving. Good riddance! Your do-what-I-say-or-else attitude was annoying, anyway.”

He darted in front of her, stopping her. Breath caught in her throat as sunlight streamed over him, paying his chiseled features absolute tribute, making his bronzed skin glimmer.

“I’m not disgusted by you. You need me. I’ve come to accept it,” he admitted, looking away from her. “But being skin-to-skin with another is painful for me. We’ll have to proceed carefully. And you’ll get over your annoyance.”

Another order!  She would show him the error of his ways. 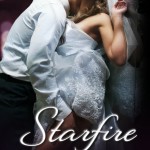 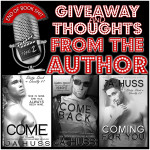 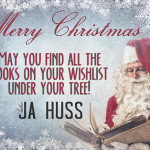 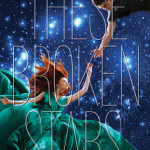 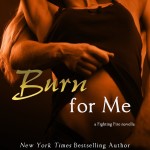 Release Day Launch and GIVEAWAY: Burn for Me by Lauren Blakely 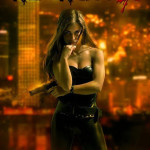 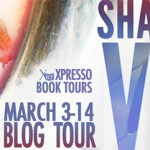 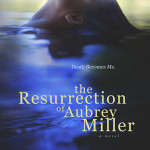